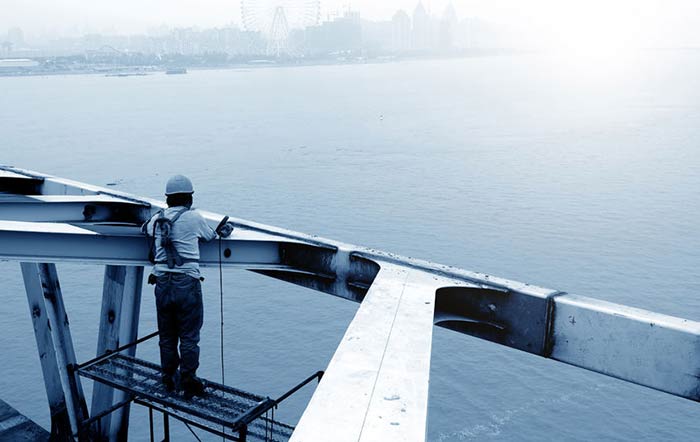 Bridges are a part of your everyday life; you work around them frequently and safety is a huge concern for you and the people you work with.

Risks associated with bridges are increasing — why? Due to national and local budget cuts, an unprecedented number of bridges in the United States are far past their prime and have been declared structurally deficient or obsolete. In addition, 228 bridges on average fail each year. Competitive bidding is forcing engineers and contractors to build bridges at lower costs, making it harder than ever to protect workers on bridge construction sites.

Another risk? Bridges are often used as conduits to get utility lines across major roads, chasms, and waterways. If utility lines are breached during a bridge failure or construction-related accident, they can cause injuries to workers, drivers, and pedestrians and significantly impact the people in the communities on either end of the bridge. 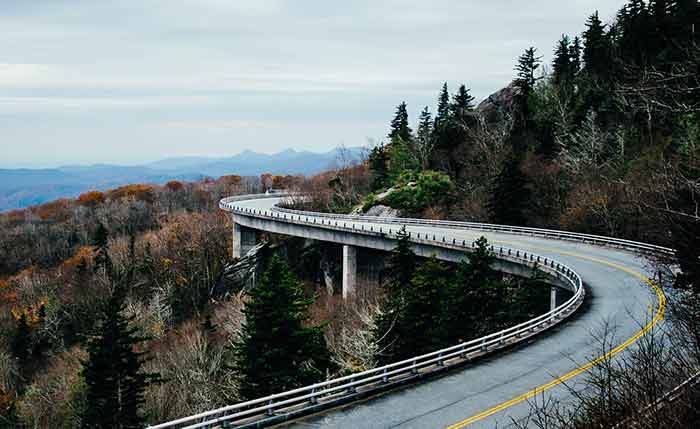 In this article we’ll provide an overview of the types of bridge-related risks you, your co-workers, and the general public face each and every day, along with what engineers, bridge designers, contractors, maintenance workers, government agencies, and others are doing to make them safer.

Bridges by the numbers

According to data from Statista.com, the state of Texas alone has more than 50,000 bridges, and the top 10 states with the highest number of bridges each have more than 20,000. That is a great deal of bridge infrastructure that must to be inspected, maintained, and rebuilt on a regular basis. 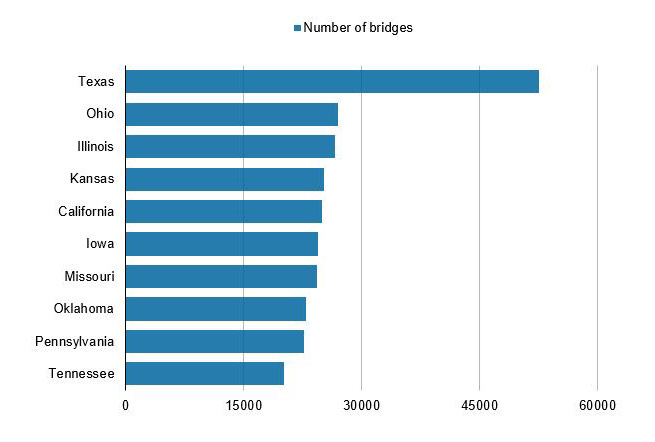 U.S. and state governments have cut back on bridge construction in recent decades. This chart uses data from the Federal Highway Administration to show when the bridges that we travel on every day were built. The vast majority are more than 20 years old. This is a big concern because old bridges are more likely to have structural deficiencies and be obsolete. In addition, they don’t have the safety features that engineers build into modern bridges. 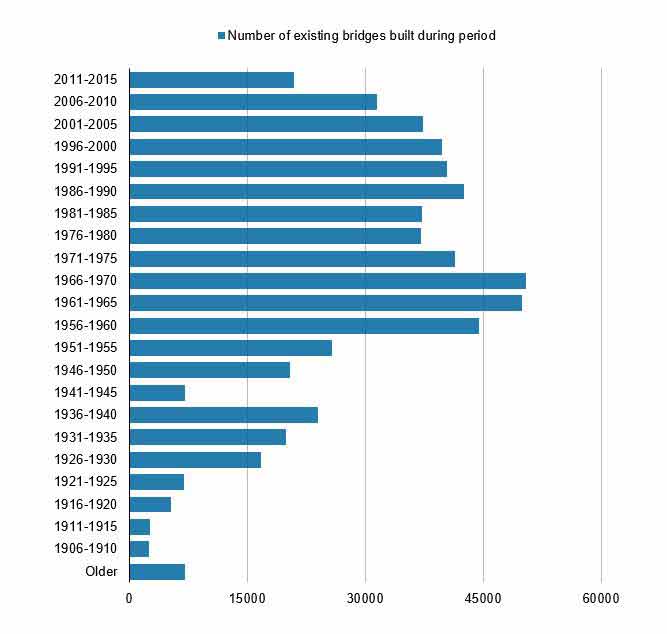 The following chart shows the number of bridges currently considered deficient, organized by the year they were built. More than 50,000 bridges — or approximately one out of 10 — have issues big enough to have speed, weight, or other limits placed on them. 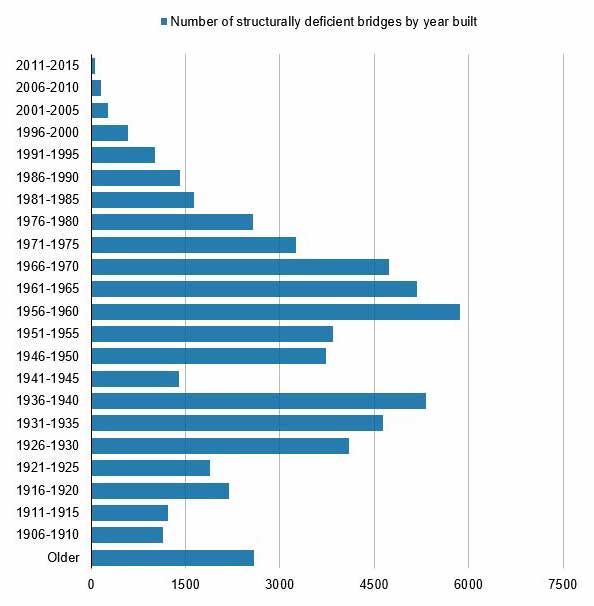 Even more concerning is the number of bridges considered obsolete. “Functionally obsolete” means that the design of a bridge is not suitable for its current use. It could lack things like safety shoulders or be unable to handle current traffic volume, speed, size, or weight. There are actually more obsolete bridges than unsound ones. 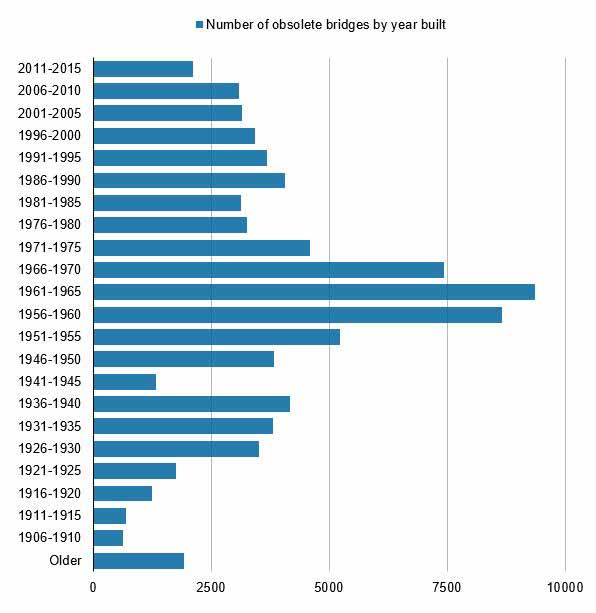 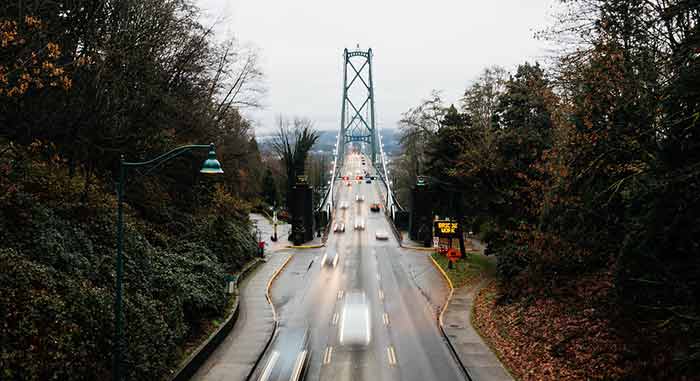 So, what is being done to protect the public and people who work on and around bridges from risks related to today’s old and decaying bridge infrastructure? Here are a few ideas currently under discussion, consideration, or being implemented.

Now, let’s look at what engineers are doing to leverage knowledge gained from previous bridge failures to build better and safer bridges.

A statistical analysis from Utah State University reveals that in a typical year, an average of 228 bridges in the United States fail. That means approximately one out of every 4,700 bridges could collapse each year.

Why do bridges fail? Here is a list of common reasons, examples of each, and what the industry is doing to avoid similar failures in the future:

Many bridge collapses happen when they’re under construction, often leading to injuries and deaths of construction workers. In fact, two of the most recent OSHA construction incident reports involved accidents on bridge construction sites.

The first took place on Monday, Jan. 19, 2015 near downtown Cincinnati. The center and east spans of a ramp bridge being demolished suddenly fell 15-20 feet onto the I-75 south freeway. In this incident, one construction worker was killed and another was injured. At the time, a concrete slab was being removed as part of the bridge demolition process, which had started one day prior to the incident. It was stopped due to concerns about some steel girders lifting off their bearings. Work resumed after recommendations made by engineers were implemented. Unfortunately, the measures proved inadequate, and the bridge came down.

The second incident happened just a few months earlier, on Nov.13, 2014 at a pedestrian bridge under construction at the Wake Technical Community College in Raleigh, North Carolina. The bridge suddenly collapsed, killing one worker and injuring four others. At the time of the collapse, concrete was being poured on a metal deck. Shockingly, just a few hours later, a similar bridge under construction just one block away also collapsed. Fortunately, no one was injured.

Other reasons for bridge construction incidents

Bridge failures are only one contributor to injuries and deaths at bridge construction sites. According to the U.S. Department of Transportation, others include: 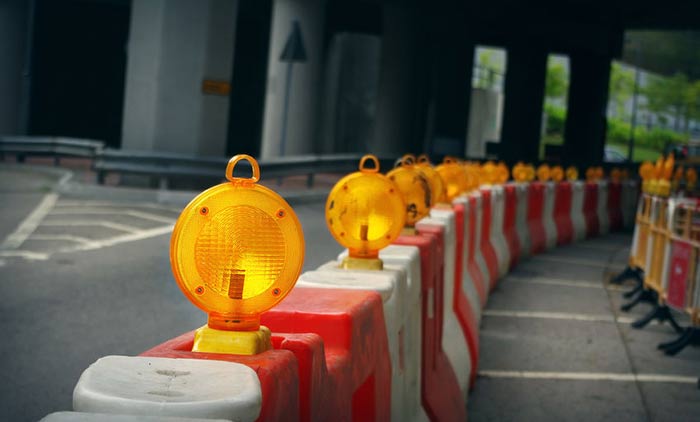 Contractors, engineers, and safety inspectors are taking significant steps to make bridge construction sites safer. Some of these include:

Traveling on and working around bridges is risky, but the general public and bridge maintenance and construction workers can rest assured that steps are being taken to reduce risk. The industry is getting creative, learning from the past and implementing best practices to keep people safe.

We’ll dig deeper into how this is being done in future blog posts. Check back for more in-depth information on this important topic.