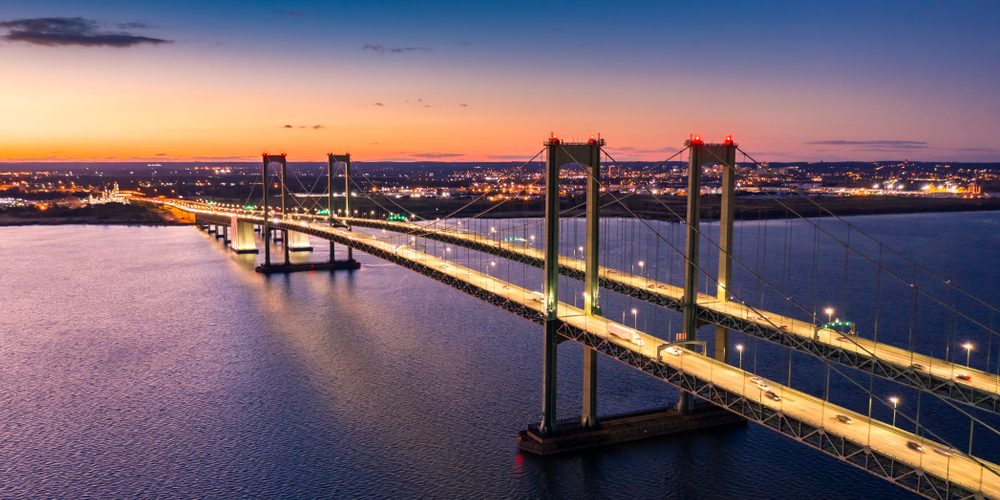 Fast, cost-effective, and long-lasting bridge repair. Who could ask for more?

The United States is facing an unprecedented challenge when it comes to maintaining and rehabilitating its aging bridges. State agencies across the country are constantly on the lookout for innovative and cost-effective ways to extend the lifespans of their bridges. Even though Congress recently approved additional funding for bridge repairs as a part of its infrastructure bill, states still need to be careful about how they spend their budget dollars.

The recently completed Delaware Memorial Bridge restoration pilot project has proved that it is possible to extend the life of a bridge by 50 years in a cost-effective way, with minimal traffic interruptions or delays.

Does this sound too good to be true? Read on to learn more!

The Delaware Memorial Bridge is a twin-span suspension bridge that’s nearly 11,000 feet long and carries eight lanes of traffic. Its vertical clearance is almost 175 feet. It’s a crucial commercial connector in the populous northeast, spanning the Delaware River between the states of New Jersey and Delaware. On average, more than 80,000 vehicles cross the bridge every day.

The first of the twin bridges was opened to traffic in 1951. The second was added in 1969. When the second span was completed, the Delaware Memorial Bridge was the second-longest twin suspension bridge in the world. Today, the original bridge carries northbound traffic and the newer one carries southbound traffic.

In 2020, the Delaware River & Bay Authority (DRBA) conducted an inspection of the bridge. It reported that rehabilitating the deck of the older bridge would extend the life of the structure.

A life cycle cost analysis of the repair techniques compared the initial construction costs with long-term life cycle costs. It showed that the costs and benefits of a UHPC overlay outweighed those of the other methods. The condition of the existing deck was still good enough to be able to use a preservation solution with a watertight and durable overlay. The technique is expected to extend the life expectancy of the Delaware Memorial Bridge by 50 years or more, without any major repairs during that time.

Before working on the entire structure, the DRBA performed a pilot project on several sections of the two bridges to test the overlay, learn more about limiting traffic impact, and test out a fully automated, self-propelled paving machine. The goal for the project was to find a fast, long-lasting, and cost-effective way to preserve the bridge that minimized traffic disruption while construction was going on.

For the last decade, UHPC has typically been used in accelerated bridge construction projects to either replace or install new bridge decks in many parts of the United States. Only recently has UHPC been installed as a thin bonded overlay on bridges. Most of the overlay projects have been pilot projects for proof of concept. However, none of these were large enough to confirm that it could be used on an almost 11,000-foot-long, eight-lane-wide bridge project with minimum traffic interruption.

As part of the pilot, the DRBA installed the largest UHPC bridge deck overlay in North America.

The material selected for the pilot project was a LafargeHolcim Ductal overlay formulation with 3.25% steel fibers. The substance reaches 12,000 psi within 48 hours of application. The pilot project found that 90 cubic yards of UHPC overlay could be installed at a width of 26 feet and a depth of four inches in an eight-hour shift. To achieve rideability and smoothness requirements, the finished UHPC surface was diamond ground and grooved. In total, 328 cubic yards of UHPC covering an area of 25,500 square feet were installed on the 1,000-square-foot pilot project.

The result is a ground and grooved road surface, comparable to a newly constructed concrete deck. The installation time for the pilot project is a new U.S. record. The experience was a good one for the road crew, providing positive feedback.

The pilot project was highly successful. Now the DRBA is planning to take on the whole bridge within the next few years. This technique promises to be a cost-effective way to get another half century of life out of the aging structures.

Use of UHPC in the U.S. and around the world

Switzerland is far ahead of the U.S. regarding UHPC overlay use on bridges. In that country, more than 200 overlays have been successfully installed in the past 15 years. The largest project was on the Chillon Viaduct, a twin 1.3-mile-long bridge.

The installation of UHPC involves removing the top two- to three-inch layer of the aging deck concrete and replacing it with a UHPC overlay. Not only can this extend the life of a bridge by decades, it also makes a bridge stronger than other preservation methods. It has greater impermeability and better bond strength with the old concrete than other options. Using it also takes far less time than replacing a full bridge deck, which can help limit traffic interruption on bridges. This is a significant benefit for structures like the Delaware Memorial Bridge, which connects many big metro areas and is a key commercial route.

Ultimately, the Delaware Memorial Bridge pilot project identified a cost-effective solution that delivered a 50-year-life-cycle bridge deck rehabilitation with minimal traffic disruption. It made the case for using the technique on the entire bridge, as well as other structures across the United States.