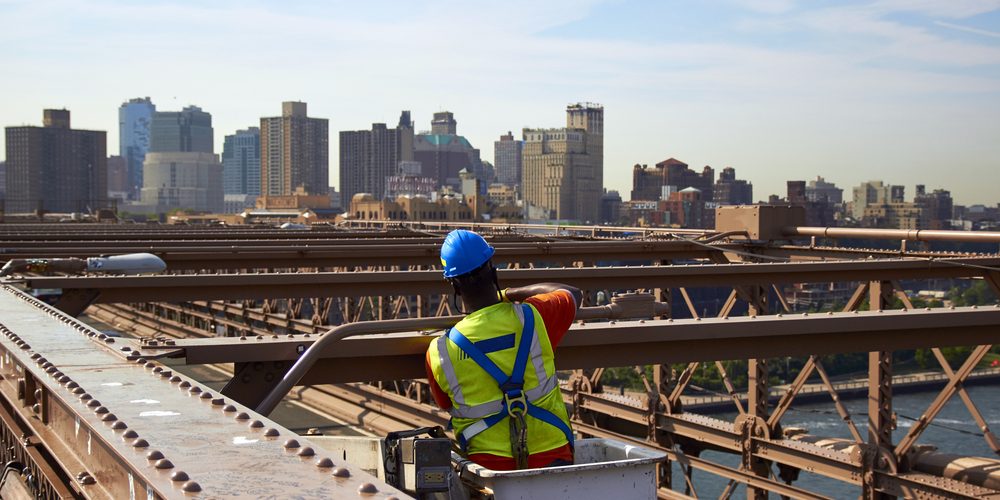 Despite the COVID-19 pandemic and limited infrastructure spending, 2021 was a banner year for bridge and highway development and rehabilitation. Here are our top five projects across the U.S. for this year and why we think they’re best in class.

The Cline Avenue Bridge is an elevated expressway in East Chicago, in northwestern Indiana. It connects State Highway 912 with I-90. It crosses over the Indiana Harbor and Ship Canal.

The new bridge replaces a structurally deficient one that was closed to traffic back in 2009. Construction of the new bridge began in July 2017. It’s just over 6,200 feet long and has a 316 foot main span. It offers 100 feet of vertical and 200 feet of horizontal clearance for waterway traffic.

The superstructure is built with sustainable, post-tensioned concrete. It feature single cell box girders. It will require limited maintenance and has been designed for a 150 plus year life. The complete structure is 9,850 ft long, which includes a concrete segmental bridge with a 2,400 foot long existing steel beam bridge adjacent to it. The existing bridge was rehabilitated while the new one was under construction. The new viaduct was built using existing pier locations, footings and foundations where possible to speed construction. Many of the elements used on the bridge were precast at offsite factories and shipped to the site and installed. This was done for cost and time efficiency reasons.

This bridge has not only improved the quality of life in its local area, it’s a beautiful addition to its surroundings.

Best in Class: Fast construction. Longevity. Low maintenance. Elegant. Who can ask for more from a bridge in an industrial area?

This Frederick Douglass Memorial Bridge redevelopment project has been in the works for more than 15 years.

The original Frederick Douglas Memorial Bridge served the District of Columbia and surrounding area for 68 years before it was declared structurally deficient and functionally obsolete. The replacement of it became the largest public infrastructure project in District history.

The unique arch design makes the bridge iconic, but it also made construction challenging. Unlike typical steel to concrete connections, which use a base plate that is outside of the section, all parts of the anchorage for the structure are internal to the arch. The designers used 3D modeling to overcome the design challenges they faced.

Arch pieces, many weighing more than 80,000 pounds, were made in Wisconsin. They had to be shipped to the bridge site and installed.

Once this project is completed early next year, it promises to become a new architectural treasure in a city full of them.

Best in Class: A complex, yet elegant, solution to a long standing problem.

The Green Street Pedestrian Bridge is a one of a kind, multi-ribbed, unbraced tied arch bridge. It spans the Salem Parkway, which was recently reconstructed. It connects the West Salem neighborhood in downtown Winston Salem with the city’s multi-use path, a nearby baseball stadium and new developments planned for the future.

The bridge was designed to serve as an iconic gateway into the downtown area and encourage further development.

Sets of inclined arches make the structure unique. Computer 3D and augmented reality modeling was used to ensure the structure would not just be beautiful, but also structurally sound. A 3D printer was also used to build models that helped designers and engineers get things right. Construction had to be very carefully sequenced because of the unusual loads carried by the structure.

Best in Class: This complex project proves that great bridges can come in small packages.

The 8th Street Bridge was definitely the top bridge rehab in the United States last year. It was a success because even though it significantly upgraded the structure, it maintained the integrity of this iconic and historic Sioux Falls bridge.

The project started with an in-depth inspection of the bridge to understand it’s condition and find areas of deterioration. Because the bridge is more than a century old, the level of deterioration was significant, especially under the arches, where little maintenance had been done over the years. In some sections, 70 percent of the structure was missing.

The bridge is located in downtown Sioux Falls in a busy area. It’s part of the city’s vision for the Big Sioux River greenway. This made access and construction challenging. A temporary causeway was built to provide access to all parts of the arches. The city’s main sanitary sewer trunk line runs under the east span of the structure, adding further complexity.

Another challenge: Designers had to recreate the plans for it because the originals had been lost.

A primary goal of the project was to maintain the original design of the bridge, while making significant improvements. Lighting was added to improve safety and highlight the arch. The third lane of traffic on the bridge was removed to widen pedestrian pathways. Original balustrade railings were replaced with precast replicas.

These changes and updates are expected to extend the life of the bridge by 75 years. And despite all the changes, the people of Sioux Falls view it as an improved version of the structure they know and love.

Best in Class: Proves it’s possible to make a historic bridge even better.

The team involved wanted to avoid impacting local businesses or homes. Another challenge was to build the elevated toll road in the median of busy Gandy Boulevard without interrupting traffic during peak travel hours.

The solution was a raised highway with a 30 foot vertical clearance (twice as high as a typical urban bridge). It allows for easy access and visibility for businesses along the Gandy corridor. The height of the Selmon Extension almost completely takes it out of the line of site at ground level. A plan was implemented that limited lane closures. Using precast elements also reduced construction impact.

Best in Class: This is a great example of a project where significant challenges resulted in a world class, well designed bridge.