There are 600,000 bridges in the United States. Millions of people cross them every day. Yet surprisingly, there are many things people don’t know about these complex structures, including the designers, contractors, and maintenance experts who work on them all the time.

1. Bridges can be friendly to the environment

Bridges 1-3 are shown left to right

Engineers are developing bridges that leverage advanced technologies and construction techniques that limit their impact on the environment and in some cases, protect fragile ecosystems from human damage. Many of these structures are not only good for the earth, they’re also architecturally amazing. Check out these examples:

1. The Kurilpa Bridge in Brisbane, Australia is one of the longest footbridges in the world. It’s also the largest hybrid tensegrity bridge, leveraging a synergy between balanced tension and compression components to create a light structure that is also incredibly strong.

The bridge features a LED lighting system that is powered almost completely by solar panels integrated into the structure. The system is connected to the local power grid so it can supplement the panels if necessary. The bridge can supply power to the city as well.

2. An amazing network of pedestrian bridges is suspended 120 feet over Telok Blangah Hill Park near Singapore. It lets visitors enjoy the park without disturbing its delicate ecosystem. Designers and engineers were careful to avoid doing environmental damage during the construction process.

3. The Langkawi Sky Bridge was designed to give people a view of the Malaysian jungle. The footbridge was helicoptered to the top of Machinchang mountain. It’s reached by cable car rather than road or hiking path, limiting impact on the environment. Unfortunately, the bridge has experienced structural issues that have forced officials to limit access. 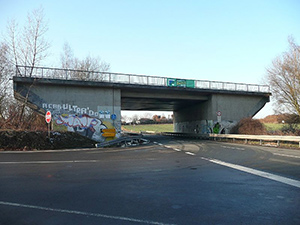 The vast majority of bridges move commuters, consumer goods, and utility services from one place to another. However, some bridge structures go no place at all. There are three basic reasons that bridges stop mid span or don’t connect to end points, including:

Based on the fundamentals of bridge engineering (harnessing the forces of compression and tension), it’s a miracle when a so-called “bridge to nowhere” survives. Check out these amazing examples:

1. The bridge near Castrop-Rauxel, Germany (pictured above) was built in 1978. It’s unusual because it’s the center span of a bridge that’s never been connected on either end. It is part of a highway system that was never completed. There are currently no plans to finish the structure.

2. An interesting two-lane bridge in Pavlovsky Posad, Russia was built in 2011. Traffic crosses it over the Vokhna River in one direction only. However, it dead ends in the other direction since there’s no road for it to continue on. Officials hope to build a road once railroad tunnel construction in the area is completed in the next few years.

3. The Half-Bridge of Hope in Russia is a wooden structure that looks like a bridge reaching from one hill to another. However, it serves no logical purpose. It simply exists as an art installation and engineering marvel.

Bridges 1-4 are shown left to right

With all the buzz lately about our southern border, it’s easy to forget that thousands of people cross the northern border between the United States and Canada each day using bridges. The Peace Bridge, which connects Buffalo, New York and Fort Erie, Ontario, handles almost five million vehicle crossings each year.

Check out these bridges that not only move traffic across major waterways but also play a vital role in border security:

1. The Peace Bridge is located on the east end of Lake Erie. The Bridge consists of five arched spans over the Niagara River and a Parker through-truss section over the Black Rock Canal on the American side of the river. The bridge is just over a mile long.

The Peace Bridge was completed in 1927 and named to commemorate a century of peace between the United States and Canada.

2. The Rainbow Bridge is an arch bridge over the Niagara River gorge that connects the cities of Niagara Falls, New York and Niagara Falls, Ontario. The bridge is not just a major border crossing, it’s also a popular tourist site because of the unique views it offers of Niagara Falls. It was completed in 1941 and was built on the site of the earlier Honeymoon Bridge, which collapsed two years earlier because of an ice jam in the river.

While this is a complex bridge infrastructure system, the actual international border crossing is a set of two parallel 90-foot-long bridges between Wellesley Island in the United States and Hill Island in Canada.

4. Traditional bridge designs can be as stable than modern ones

Many believe that for shorter spans, modern variations on beam bridges are more stable than older model arch bridges. However, this isn’t always the case. With arch bridges, the entire structure is under compression, which is dissipated out and down from the center through the arch, right into the supports. In a compact space, this is a formula that’s hard to beat.

Historically, some of the longest-lasting limited-distance bridges are built around arches. Here are a few examples of arch bridges that have withstood the test of time:

1. The Pons Fabricius has connected Tiber Island to the heart of Rome since 62 B.C. It is the oldest bridge in the city. Overall, the structure is 200 feet long and 18 feet wide. It includes two broad arches, supported by a central pillar. It’s built of ancient volcanic rock with brick and marble facing.

2. The ancient Romans constructed some of the most durable bridges ever. They built the Caravan Bridge, the world’s oldest reliably dated bridge. It’s a stone arch span over the Meles River in Izmir, Turkey. According to Guinness World Records, it dates from 850 B.C., making it almost 3,000 years old.

3. The Arkadiko Bridge is a Mycenaean bridge located on the Peloponnese in Greece. It dates back to the Greek Bronze Age and is one of the oldest arch bridges still in use. The structure is 72 feet long, 18 feet wide, and 13 feet high. The bridge was originally designed for chariot use.

4. The Anji Bridge, built in 695 AD, is the oldest bridge in China. It’s known as the “safe crossing bridge” because it was carefully designed to be structurally sound.

At the time it was built, it had the longest arch and was the most technically advanced bridge anywhere in the world. The fact that it has made it through floods, earthquakes, and other natural disasters is a testament to the quality of its construction.

5. The highest bridge on earth was completed in 2016

Back in September, the Beipanjiang Bridge, in mountainous southwestern China, was opened to traffic. It rises 1,854 feet above a river. That’s more than a third of a mile! It took the highest bridge record from the Si Du River Bridge in the central province of Hubei, also in China.

The bridge cuts the time it takes to make a popular road trip from Liupanshui in Guizhou to Xuanwei in the neighboring Yunnan province from approximately five hours to less than two. Even though the Beipanjiang Bridge is the world’s highest, the world’s tallest (measured as the height of its own structure, rather than the distance to the ground) is France’s Millau Viaduct.

Did you know? Modern equipment makes it easier to build and maintain higher and taller bridge structures.

6. Bridges can be made from glass

On August 20, 2016, the highest and longest glass-bottomed bridge in the world was opened in China. It crosses China’s Zhangjiajie Grand Canyon in the Hunan Province. The bridge is suspended more than 1,400 feet above the valley and is almost 1,000 feet long.

Unfortunately, officials were forced to close the bridge within a few days of its opening because it was overwhelmed by visitors. The structure was designed to handle 8,000 people per day, but more than 10 times that number were showing up to travel across it daily. Fortunately, the large pedestrian traffic volume caused no damage to the bridge.

Officials are working on a plan to control the number of visitors to the glass bridge each day.

7. Fracture-critical bridges are among the nation’s top safety threats

Thousands of bridges were built all over the United States in the 1970s and 1980s to complete the nation’s highway system. Most were built on the cheap and have an an anticipated maximum life of 50 years. The life span of these bridges is ticking down, and any of them could fail at any time.

According to Federal standards, bridges must be inspected, at a minimum, every two years. Older, more vulnerable bridges must be watched more closely. This requires close-up visual inspections using boats, cranes, drones, hydra platforms, and other modern equipment.

8. One out of four U.S. bridges is structurally deficient or functionally obsolete 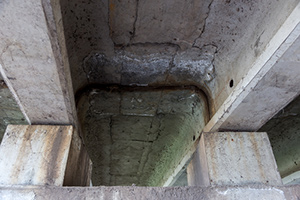 Much has made recently about the nation’s declining infrastructure. More than two hundred million people take trips across structurally deficient bridges in the United States each day.

Equally surprising: The average age of the nation’s 607,380 bridges is currently more than 40 years old.

The Federal Highway Administration (FHWA) estimates that federal, state, and local governments would need to invest $20.5 billion annually in order to repair the nations’s bridges in the next 12 years. Only $12.8 billion is being spent each year right now.

Check out the latest Report Card for America’s Infrastructure to learn more surprising facts about the state of bridges in the U.S.

9. The top 10 causes of bridge collapses

A recent report in How Stuff Works Science reveals the top 10 reasons bridges fail. One of the key findings: The majority of bridge failures aren’t the result of a single factor. Instead, most bridges collapse because of a combination of things, such as a design flaw being stressed to its limits because of an earthquake or extreme weather event.

Do you have any facts about bridges others might not be aware of? Comment below and we’ll include them in a future article.