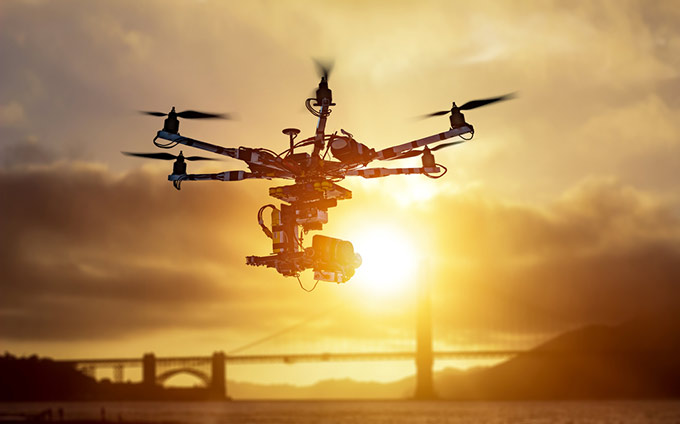 America’s bridges and the utility infrastructure they support are aging and declining at a rapid pace. The American Society of Civil Engineer’s 2013 Report Card on America’s Infrastructure (the most recent available) assigned our country’s bridge infrastructure a mediocre C+ grade. The same report gave different types of utilities scores ranging from B all the way down to D.

With so many of the nation’s bridges and utilities in poor shape, it’s critical that inspections take place more often than ever. In doing so, engineers can find small flaws and issues before they become big ones that could lead to accidents, injuries, damage to vehicles and other property, partial bridge failures, or complete collapses.

Drone inspections may become an important part of this equation. 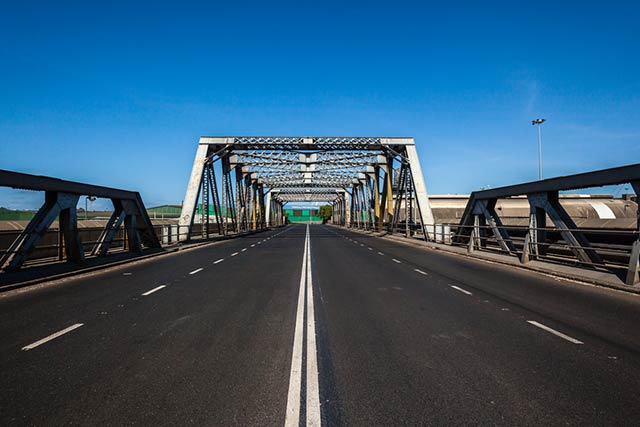 The biggest barriers to conducting additional bridge and utility inspections are access, worker safety, cost, and traffic issues (for an in-depth look at monitoring at-risk bridges with limited resources, check out our blog here).

Did you know? There is specialized bridge access equipment that can be used on sidewalks or the traffic shoulder of a bridge that won’t disrupt traffic during inspections.

What if there was a relatively easy and cost-effective way to access hard-to-reach areas of bridges more frequently? What if it would have no impact on traffic? Would that support an increase in the number of inspections that take place?

Using drones to facilitate inspections could help do all these things. It’s a solution that’s being tested here in the U.S. and in other countries.

Specialized drones help inspectors and engineers “see” hard-to-access parts of bridges, and could be a great addition to hands-on inspection programs. These drones are similar to the ones that are used to take photographs and videos in challenging environments, monitor weather, control traffic, support firefighters, and more.

Check it out: This video shows images from drones, taken during several bridge inspections, including views of pipelines, electric cables, and other utility infrastructure.

Drones are more formally referred to as unmanned aerial vehicles (UAVs). Some drones are very simple flying machines that are controlled remotely. Others can be thought of as complex robots that are able to fly. Drones are operated by remote control or through software that guides them using pre-determined flight plans that coordinate with global positioning systems.

Drones are becoming more viable options to support inspections because they’ve become easier to use and less expensive to purchase. Earlier generations of drones were hard to navigate and undependable. This is no longer the case, now that more companies are developing drones for specialized purposes, including bridge and utility inspections.

New production methods make it cheaper to manufacture high-quality drones. Competition in the marketplace is also driving prices down.

Drones as a tool for bridge inspections 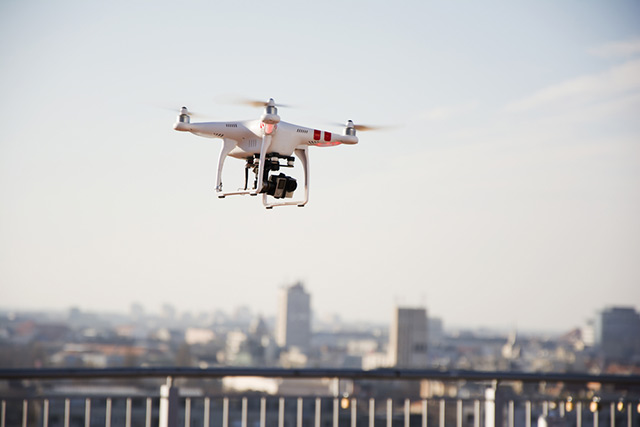 Using drones as a part of the bridge inspection process could be a game changer for the industry. They make it easier for engineers to see the hardest-to-reach sections of bridges at almost any time with little or no advance notice or preparation. At the same time, the use of drones puts fewer workers at risk since they don’t have to climb to high, dangerous, and hard-to-reach bridge areas as often.

Before you go out and buy a drone to conduct bridge inspections, be aware that this application of the technology is in its infancy stages. While not in wide use now, recent tests have shown significant promise.

The Minnesota Department of Transport (MnDOT) Bridge Office recently conducted a multiphase, multiyear drone research project. The goal of their study was to determine whether using drones could cut the cost of inspecting bridges and improve safety. In addition, they also looked into the impact it would have on efficiency and accuracy if drones could automatically download data into survey and inspection reports.

Check it out: This video shows the MnDOT team conducting a drone-based bridge inspection.

MnDOT hopes to use their findings to develop “best practice” guidelines that will provide information on how to use drones to inspect bridges across the state and beyond. According to the agency, there has been significant interest in the study throughout the United States.

The Minnesota study started out using a drone called the Aeryon SkyRanger. Overall, the drone performed well, but the testing process identified a few issues. The first is that this particular drone is not able to look upward, an important factor in under bridge inspections, especially for looking at utility infrastructure. The other issue: The machine is not able to fly under bridges when there is low or no GPS coverage.

The agency moved on to test the eXom (albris) drone manufactured by senseFly. It has ultrasonic sensors and multiple cameras. It’s also able to look directly up and can be operated without GPS, which makes it easier to navigate under bridges. This drone proved to be a better model for bridge inspection work.

What’s been learned so far?

First, not every bridge inspection is “drone appropriate.” Projects that are good candidates for drone use include those that:

Drones are also valuable for use on bridges that are too low for snoopers to do under-bridge inspections and too high for boats or platforms to be effective.

Check it out: This news report explains the MnDOT drone bridge inspection study.

A novel feature of leveraging drones for inspections is that they can use thermal cameras for deck delamination assessments. Drones are also flexible enough to be able to deliver still pictures, videos, infrared camera images, and 3D models to support the inspection process.

Initial reads from the Minnesota study point toward drone use for regular spot inspections of older bridges that are in poor condition, supplementing the standard two-year inspection cycles. 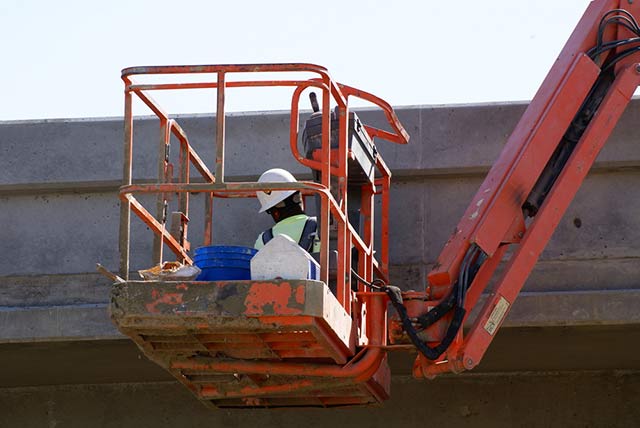 Another thing to consider is that inspections facilitated by drones aren’t completely “hands-off,” passive processes. In order to meet National Bridge Inspection Standard (NBIS) requirements, a fully trained and certified inspector must be present at every inspection to ensure public safety. That means an inspector can’t just review photos taken by a drone in an office at a later time. They must be actively involved in every step of the process.

The team in Minnesota found that a best practice is to use a two-person team to conduct drone inspections. The bridge inspector or engineer controlled the drone’s camera and a second person flew the drone. They found that a hands-on connection between the inspector and drone lead to higher quality, more detailed inspections. They recommend that engineers review and document drone-generated photos on site so issues can be addressed immediately.

Tip: If your municipality outsources bridge inspections, check with your provider to see if they’re considering using drones in the future. It could impact your pricing and budget and factor into insurance costs in the years ahead. Better to start planning for this sooner rather than later.

A recent study being conducted by two teams from Tufts University and funded by the National Science Foundation (NSF) has taken a different approach to leveraging drones for bridge inspections. It uses wireless vibration sensors, cameras, and drones to monitor the structural stability of bridges.

Vibration sensors with radio frequency identification (RFID) chips and computer processing units are attached to a bridge and programmed to collect vibration data. The sensors then process the data and store pertinent information on the RFID tags. When it’s time to inspect the bridge, drones equipped with computers fly close to the sensors and receive data from the RFID chips.

If the system registers changes in vibration signals, it could be a sign that the bridge is compromised or damaged. When the data indicates an issue, the cameras on the drone take pictures of the area, looking for signs of possible damage. The drones transmit the data and pictures to a computer, and a color-coded system alerts inspectors of possible problems.

This system allows municipalities to focus more resources on bridges with critical problems and less on those with minor or no issues.

MnDOT is continuing with the second phase of its study. Additional states, including Michigan, are now doing research on drone-based bridge inspections. Ohio is using drones to inspect bridges on certain state highways. In addition, the Federal Aviation Administration is working through rules that will allow drones do bridge inspection work while keeping planes, helicopters and other flying vehicles safe.

Food for thought: Could drones ever be used to build bridges? Maybe not. But this amazing video shows them building a simple yet safe and strong rope bridge.

Take steps now to get access to the equipment you need to reach vulnerable bridge areas identified by drones. New innovations make it possible to get safe human access to sections of bridges that drones inspect first. Learn about them now so you’re prepared for the brave new world of drone inspections.