Learn what led to this popular trend

Despite some notable exceptions, like the Golden Gate Bridge, a large number of steel bridges across the United States are painted a similar shade of sage green.

Is it a coincidence?

Not at all. This particular color became popular because it blends into many natural environments.

In this article, we’ll tell the story of how green became THE color for steel bridges.

The manufacturer of the green paint used on countless bridges across the United States calls the unique shade, ODOT Green. It was named after Oregon’s Department of Transportation (ODOT), the state agency that initially used it and made it popular.

One of the first viaducts that was painted green was the St. Johns Bridge, a steel suspension structure that crosses the Willamette River in Portland, Oregon. It connects the city’s Cathedral Park neighborhood with an industrial area near Linnton. 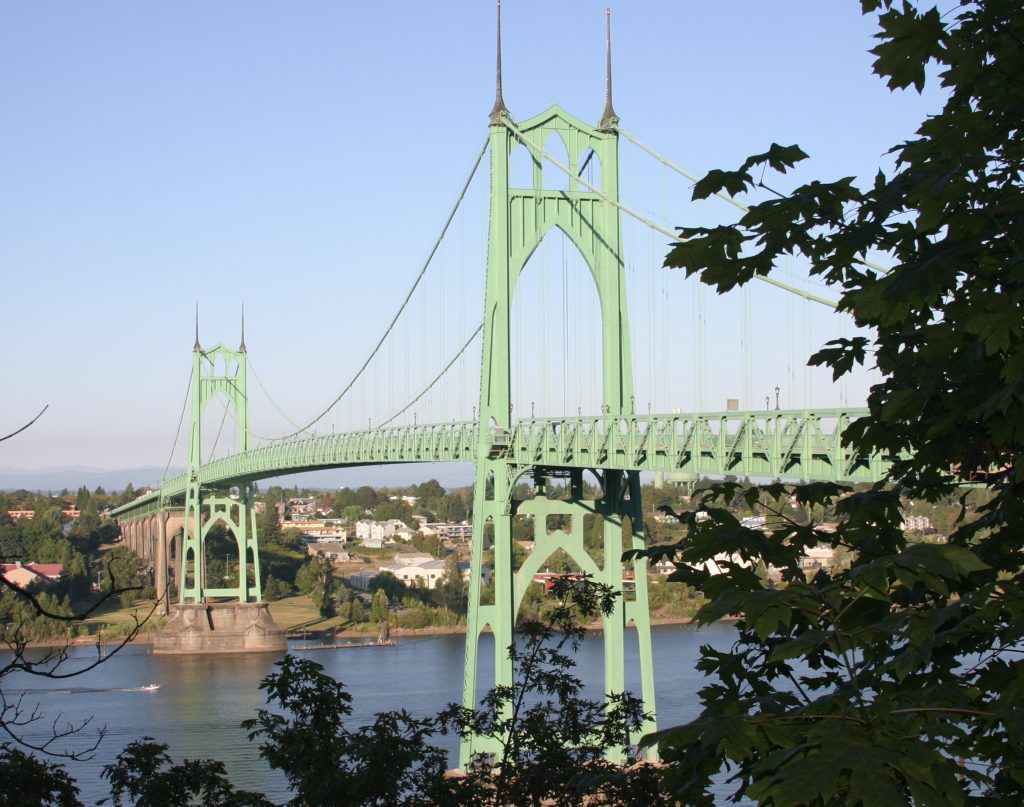 This local historic landmark was designed in the gothic style, and its prominent supports, which resemble church steeples, are the reason the adjacent neighborhood is known as Cathedral Park. The bridge is just over 2,000 feet long and approximately 400 feet high and is one of only three suspension bridges in the state of Oregon. It officially opened to traffic in 1931 and is still the tallest bridge in Portland.

Prior to its completion, the area was served by a ferry service that carried approximately 1,000 vehicles per day. It was a struggle to secure funding for the bridge because the location was considered rural, and business owners in the city weren’t interested in supporting a bridge that would not help generate revenue for them. However, a grass-roots lobbying effort encouraged voters to approve a bond of more than four million dollars to build the viaduct.

The designer of the St. Johns Bridge was chosen as a result of a competition between David B. Steinman, who had a national reputation for building landmark bridges, and Conde McCullough, a respected local resident. Steinman was an artistic self-promoter, while McCullough had a quieter, more technical mindset and personality.

Both men were visionaries who believed that bridges could be more than just functional. They felt these structures could actually enhance their natural surroundings and improve the lives of the people who crossed and viewed them every day. This was a revolutionary concept at the time.

In 1928, the two men submitted proposals for the bridge. The selection process was a difficult one because some of the judges on the committee preferred that the bridge be designed by someone who lived and worked in the Portland area. Others liked the idea of awarding the contract to a bridge design expert who was nationally known, adding prestige to the project.

Ultimately, the committee chose Steinman’s plan, which was inspired by the evergreen-covered hills that surround Portland. It was specifically designed to enhance the local environment. The gothic spires were meant to evoke pine trees, even though many today view them as looking more like church steeples. A cantilever bridge was originally planned for the site, but a suspension bridge was finally approved because it was significantly cheaper to build.

An additional complication came up during construction of the bridge. Because it was located near the runways of the Swan Island Municipal Airport (which no longer exists), some government officials wanted the bridge painted yellow with black stripes to make it more visible to pilots. It was thought this would help prevent collisions when planes were taking off or landing. 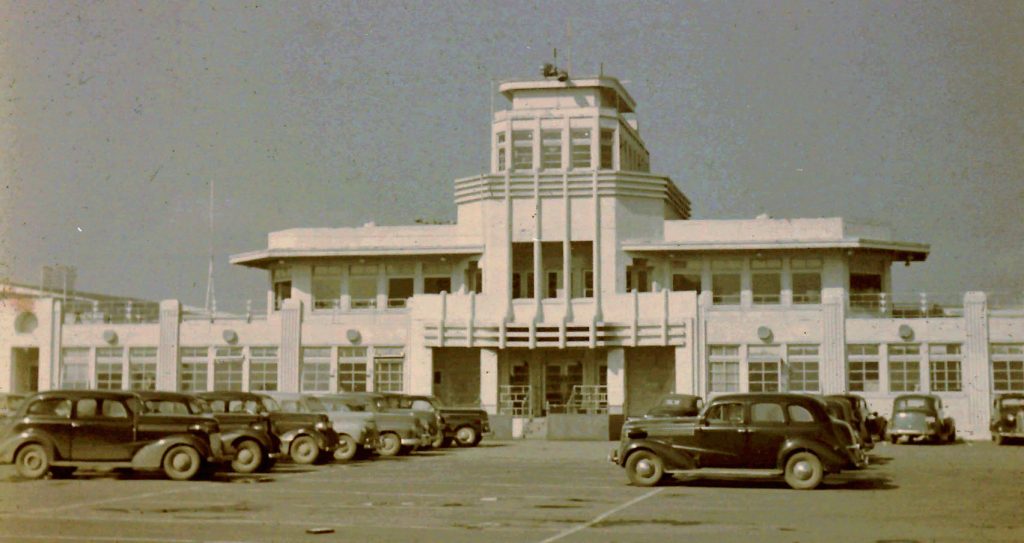 Steinman, along with many local residents, argued that the bee-striped color scheme would negatively impact the natural environment and make the prominent structure unsightly. They prevailed, and the bridge was painted its signature shade of green, known then as “verde green.” Fittingly, officials made the announcement about the final color choice on St. Patrick’s Day, 1931.

Painting a bridge green was a radical move at a time when almost all were black or grey. The only other colorful viaduct in the United States was the Mount Hope Bridge in Rhode Island, designed by Steinman, which was also green.

Interesting fact: Development of the St. Johns Bridge began one month before the 1929 stock market crash. It provided many people in the Portland metro with work during the first years of the Great Depression.

At the time of its completion, in addition to being the longest suspension bridge west of the Mississippi River, the St. Johns Bridge set many other records, including:

After a long career, Steinman said the St. Johns bridge was his favorite project. “My best poem,” he described it, “a prayer in steel.”

Interestingly, while the St. Johns bridge was Oregon’s first green bridge, it’s technically not the the state’s first ODOT green one. That specific shade of green first appeared in 1933 on the John McLoughlin Bridge (named after a local doctor), designed by Steinman’s rival, Conde McCullough. It carries traffic on Highway 99E across the Clackamas River, connecting Oregon City to Gladstone.

The John McLoughlin Bridge was considered one of the most beautiful of its class.

While the St. Johns Bridge is an iconographic local landmark, the American Institute for Steel Construction gave the McLoughlin bridge its own honor: declaring it “the most beautiful bridge of its class.”

Ironically, when McCullough’s bridge earned this accolade, it had been painted black. It earned its prize because of a drawing that showed the bridge painted green. McCullough was forced to repaint the structure sage green in order to receive the award. The John McLoughlin Bridge is still green today.

Over time, McCullough constructed dozens of steel bridges across Oregon. All were painted ODOT green. The best known line is the Oregon Coast, complementing its natural beauty and never overshadowing it. 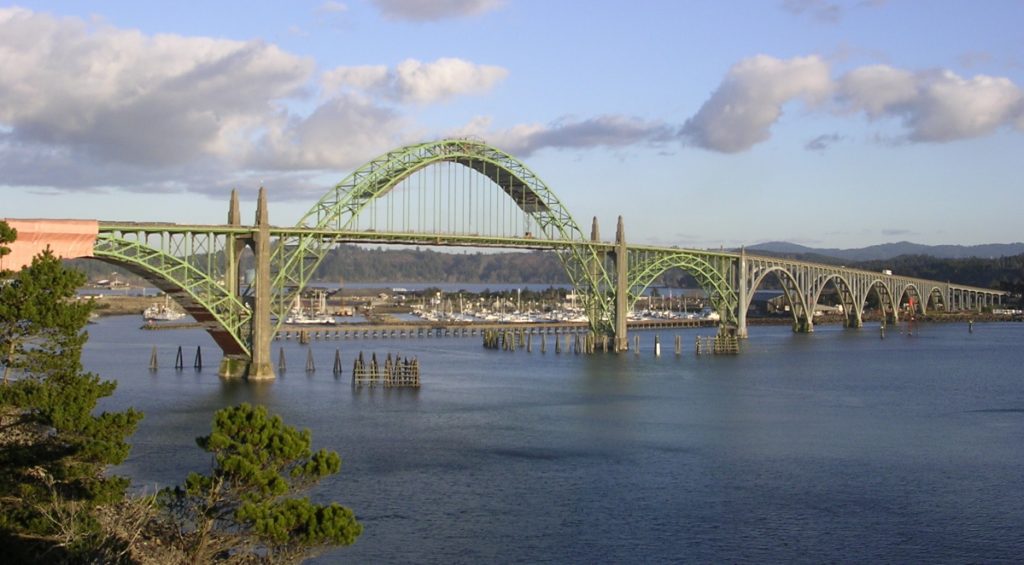 The Yaquina Bay Bridge is widely considered to be one of McCullough’s best and is an Oregon landmark.

While McCullough built bridges in Oregon, Steinman developed green bridges all over the country. He influenced one of the largest early regional adaptors of the trend: the New York City bridge authority.

The future of green bridges

Will the ODOT green color trend continue on into the future? Maybe or maybe not. Today, more and more bridges are being constructed out of concrete. And in many cases, new steel bridges are made of weathered steel, which develops a red rust finish that does not need to be painted or repainted. This technique can save money over time, a big factor in an era of tight government budgets.

Regardless, McCullough and Steinman’s green legacy will live on in thousands of structures all over the United States, reminding people of the enhanced value bridges can provide to their lives.