It’s more likely than you think.

Have you seen the recent Domino’s commercials asking people to recommend damaged roads in their communities that are in need of repair? Perhaps you’ve even noticed one of their branded road repair crews working in your community.

The campaign is centered around the simple concept that potholes and other road hazards prevent pizzas from getting to their final destinations intact. Boxes tip over and cheese slides off when the pies travel over bumpy streets. It’s a novel way for Domino’s to draw attention to a major national infrastructure issue while presenting itself as a hero, helping municipalities make badly needed road repairs they simply can’t afford.

In this article, we’ll examine how advertising, sponsorships, and other types of partnerships are being leveraged to help make up for government underfunding of construction of bridges and roads, along with repairs to them. We’ll also explain what you can do to take advantage of this emerging opportunity.

The case for branded bridge and road repairs

According to the Report Card for America’s Infrastructure, which is compiled every four years by the American Society of Civil Engineers (ASCE), America’s bridges earned a mediocre grade of C plus. Roadways, including those connecting into bridges, earned a more dismal grade of D.

The report depicts the condition and performance of American infrastructure in an easy-to-understand way by awarding letter grades similar to those used on school report cards. 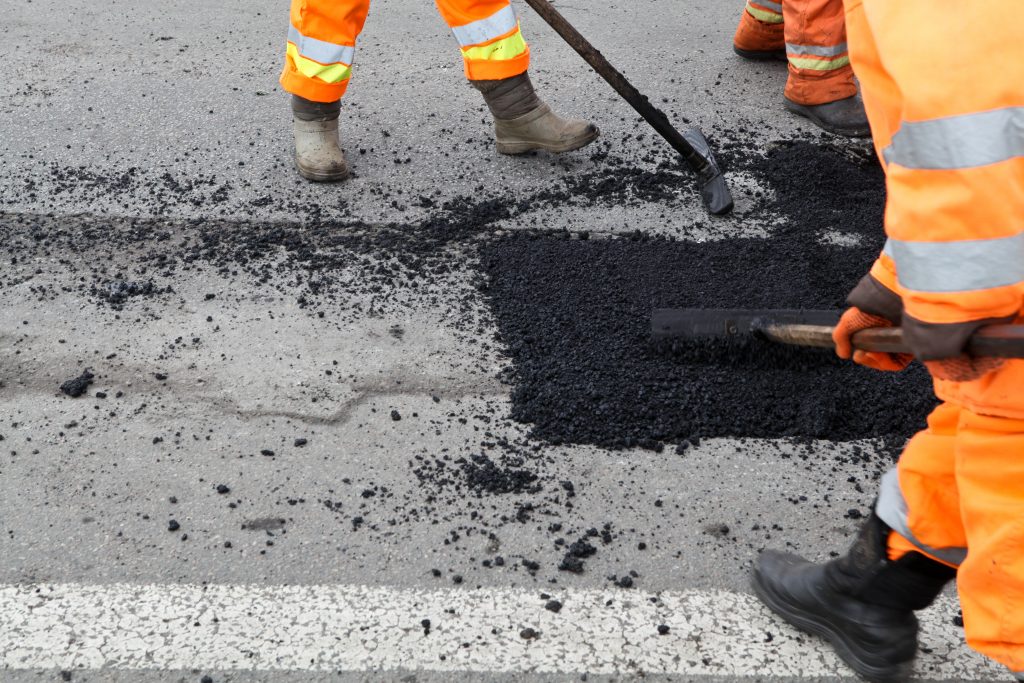 U.S. bridge infrastructure by the numbers

U.S. road infrastructure by the numbers

All of this data comes from ASCE.

The vulnerable state of bridges and roadways in the U.S. is one reason it’s likely that advertisements won’t just be seen on screens, paper, and billboards, but on roadway signs, entrances to bridges, and pavement as well. Towns and cities with limited resources are turning to private entities to fund, plan, and complete public bridge and road projects using different types of sponsorship and partnership agreements.

One of the best-known examples of corporate infrastructure sponsorship is the current Domino’s Paving for Pizza marketing campaign. The chain decided to help out the local communities they serve by fixing potholes. 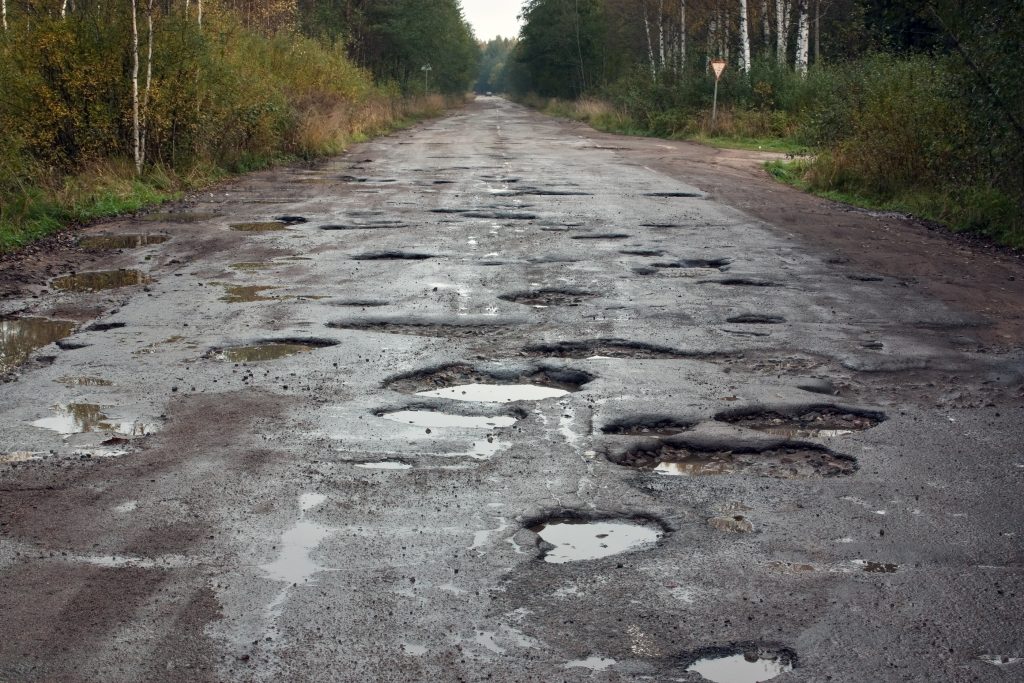 The connection between pizzas and potholes is more logical than it may seem. Many Domino’s pizzas are damaged while being transported over roadway potholes, cracks, and bumps. This left many Domino’s customers unhappy and cost the company money to replace damaged pies. Instead of writing this off as an unavoidable negative customer experience and corporate loss, the Michigan-based company has turned it into a marketing and public relations bonanza.

Domino’s has maximized the brand impact of its efforts. Paving equipment features a prominent Domino’s logo and is painted in the company colors of red, white, and blue. A company message is often applied over repaired sections of road.

So far, reports say Domino’s has fixed approximately 200 potholes. Many communities are using an online form to request a fix for their potholes. Officials in the towns that Domino’s has helped are pleased with the results and appreciate the support. Bill Scherer, the mayor of Bartonville, Texas, one of the areas that has benefitted from the program, confirmed, “This unique, innovative partnership allowed the Town of Bartonville to accomplish more pothole repairs.”

The efforts Domino’s has made have had a solid impact in the locations they’ve supported. However, the company has only been able to take on a very small percentage of the vast amount of infrastructure work that must get done across the U.S.

The FIRST road sponsorship program that made a BIG impact

Domino’s idea to sponsor roadway repairs has become well known because of the major marketing campaign behind it. However, it’s not the first, only, or biggest road and bridge sponsorship program.

The Adopt A Highway Maintenance Corporation® (AHMC) pioneered the public-private highway partnership model when it rolled out its Adopt A Highway® / Sponsor A Highway® programs in 1990 in California. Today, companies large and small take advantage of the opportunity to adopt sections of roadway and more all over the world.

Over the last 20 years, AHMC has supplied more than $100 million in highway and other infrastructure services in 22 states. They’ve been paid for by more 15,000 companies of all sizes, from local grocery stores and gas stations to global Fortune 500 corporations.

A testament to the success of the program: Almost 95 percent of all Department of Transportation contracts awarded to the Highway Maintenance Program are still active today.

AHMC’s long history and national presence give it an unparalleled knowledge base related to bridge and road contracting, marketing and project management. Knowledge gained and best practices learned in one location are quickly transferred to others. The same is true for mistakes, which helps avoid making them over and over in multiple locations. This is particularly important at a time when infrastructure spend must be maximized and costly errors avoided.

Typically, AHMC is approached by state and federal agencies seeking advice on public-private sponsorships. Most are interested in new sponsorship and marketing opportunities to supplement the costs of essential public infrastructure programs. Experts affiliated with AHMC provide information about infrastructure maintenance and improvement and sponsorships, along with state and federal regulations governing roadways and bridges, sign manufacturing. and installation of signage.

Some of the programs offered by AHMC include:

This is one of AHMC’s best-known initiatives. Maintenance services, including garbage removal, landscaping, and sweeping are done by professional crews. It is paid for by private businesses in exchange for prominent signs recognizing their support.

Signs providing critical traveler information are funded by businesses in return for sponsor recognition panels incorporated into the signs.

Other sponsorship and advertising opportunities

More and more, state and local governments are looking for creative ways to sponsor bridge and roadway infrastructure. AHMC offers fresh insights on developing innovative sponsorship or naming opportunities for things like bridges and toll plazas. 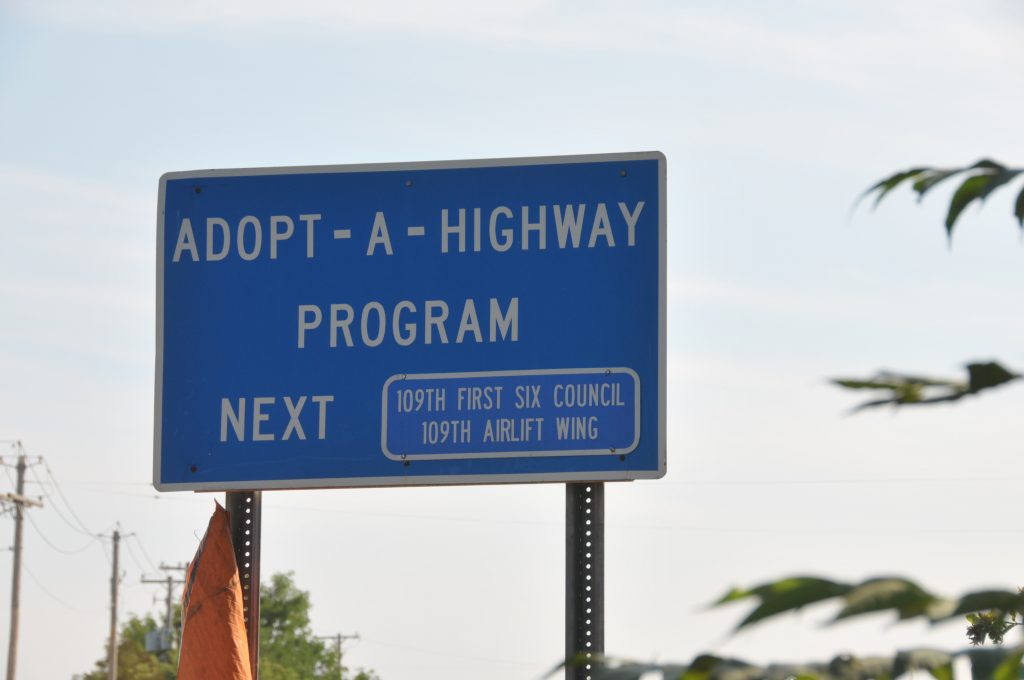 The future of bridge sponsorship

For many, sponsorship of bridge and road development and repairs might seem like a novel concept. However, the funding of public assets by private firms has been happening for a long time. Currently, the National Bridge Inventory lists roughly 2,200 privately owned bridges that are used by the public in 41 states and Puerto Rico.

The Federal Highway Administration has traditionally taken a hard stance against allowing any type of advertising on its roads. It has threatened to pull federal funding from states that attempt to do this. However, in today’s softening regulatory environment, this could change. Most states and local municipalities have few regulations related to this issue.

All these factors, coupled with the public’s growing comfort with naming public assets after private entities, make road and bridge “branding” more likely. Few people two decades ago could have imagined sports stadiums named after financial and energy companies, yet it is a common practice today. Could the Citi George Washington Bridge be far behind?

As someone working in the bridge and roadway development industry, you must stay up to date on this emerging trend. Developing relationships with potential local and nation sponsors could be an innovative way to expand on the concept of using public private partnerships to fund bridge repair and development projects. It might be a great new way to expand your business.