Ever wonder why certain bridges are so transformative and perfect for their locations?

It’s because designers and engineers have found the ideal structural solution to span a body of water, valley, or roadway.

In this two-part series, we’ll look at:

Arch bridges are among the oldest crossings on earth. They’re also some of the strongest. Instead of pushing forces downward, the weight of arch bridges is pushed outward along the arch to the structural supports on either end. These supports, called abutments, carry the load and prevent the ends of the bridge from collapsing outward.

When arch bridges support their own weight and that of the vehicles, railroads, pedestrians, and other things that cross it, all parts of the arch are under compression. That’s why they must be built of materials that can withstand extraordinary forces.

Arch bridges typically span shorter distances because of the limited stress levels that arches are able to withstand. However, there are ancient examples that cross very long distances by using multiple arches and contemporary ones that leverage modern engineering techniques and materials to extend their length.

Throughout history, different civilizations have used a variety of materials to make arch bridges strong, to great — and lasting — structural and aesthetic effect. 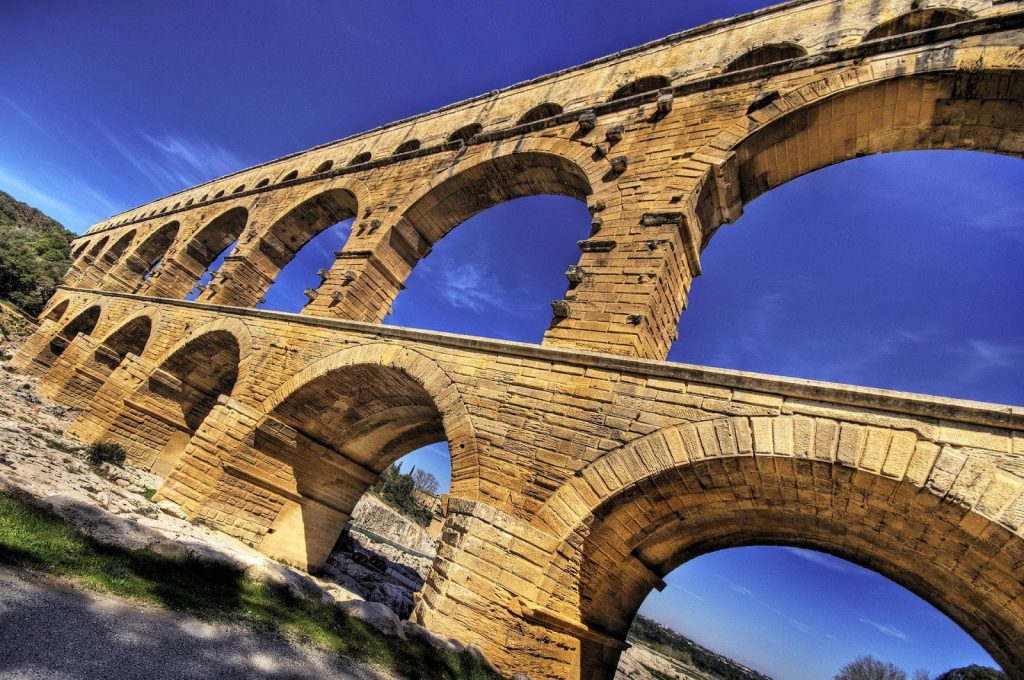 The Pont du Gard is an ancient arch bridge built of carefully cut and placed stones.

The ancient Romans used stone. One of the most famous examples of a stone arch bridge is the Pont du Gard aqueduct built by the Romans near Nîmes, France. It has survived more than 2,000 years. The builders used mortar to secure the stones together only in its top tier. Those in the lower levels are held together by careful cutting and positioning and the force of their own weight.

The New River Gorge bridge is an example of a modern-age arch bridge. It frames its natural environment in an elegant way.

More recently, steel and prestressed concrete have made it possible to build longer and more open arches. An example is the inspiring 1,700-foot span over the New River Gorge in West Virginia, which was completed in the late 1970s. 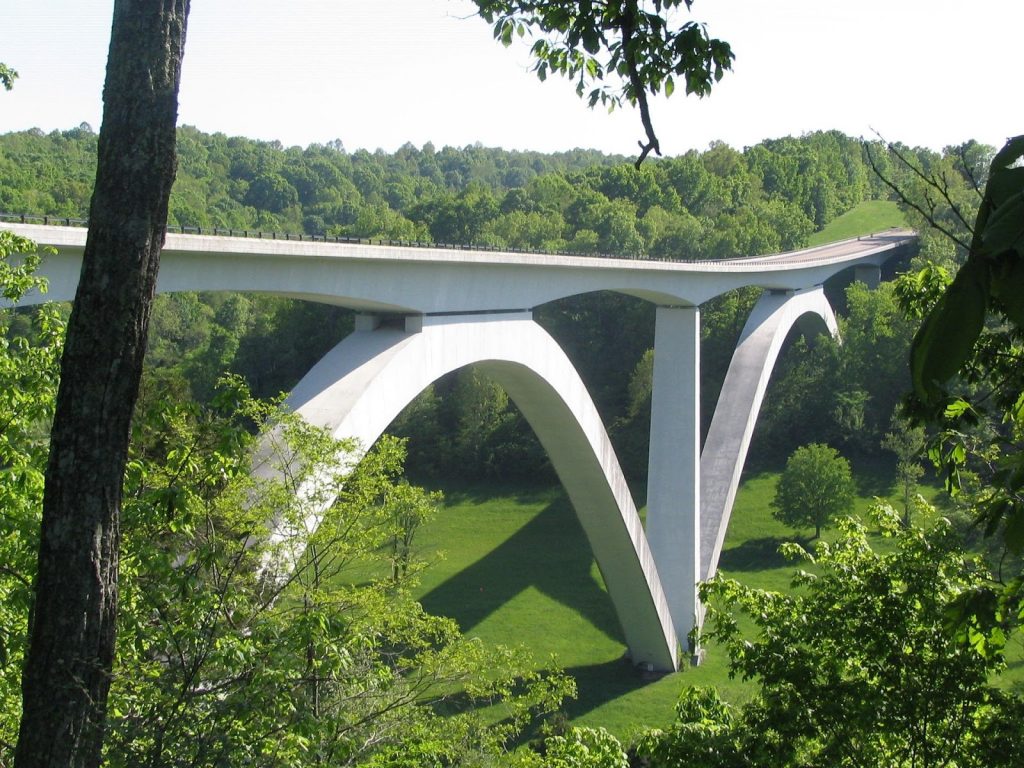 The Natchez Trace Parkway Bridge is a sleek yet cost-effective addition to its natural setting.

Another contemporary iconic arch bridge is the Natchez Trace Parkway Bridge in Franklin, Tennessee. It was opened to traffic in 1994 and was the first arch bridge in the United States to be built from segments of precast concrete, a highly economical material.

Despite the cost-effectiveness of this structure, it’s an extraordinary addition to its natural environment. It features two graceful arches that support the roadway.

Most arch bridges use vertical supports to distribute the weight of the roadway to the arch below. However, the Natchez Trace Parkway Bridge was designed without the supports, to create a lighter and more open structure. Instead, most of the load of the bridge sits on the arcs of the two arches, which have been slightly flattened to better carry it.

Over the years, this structure has changed how engineers and designers think about arch bridges. It has helped bring these ancient structures into the future.

Beam (or girder) bridges are the simplest, earliest, and most inexpensive of all bridges. In their most basic form, beam bridges have a horizontal structure that’s supported on either end by piers. The weight of the beam pushes straight down on the piers. 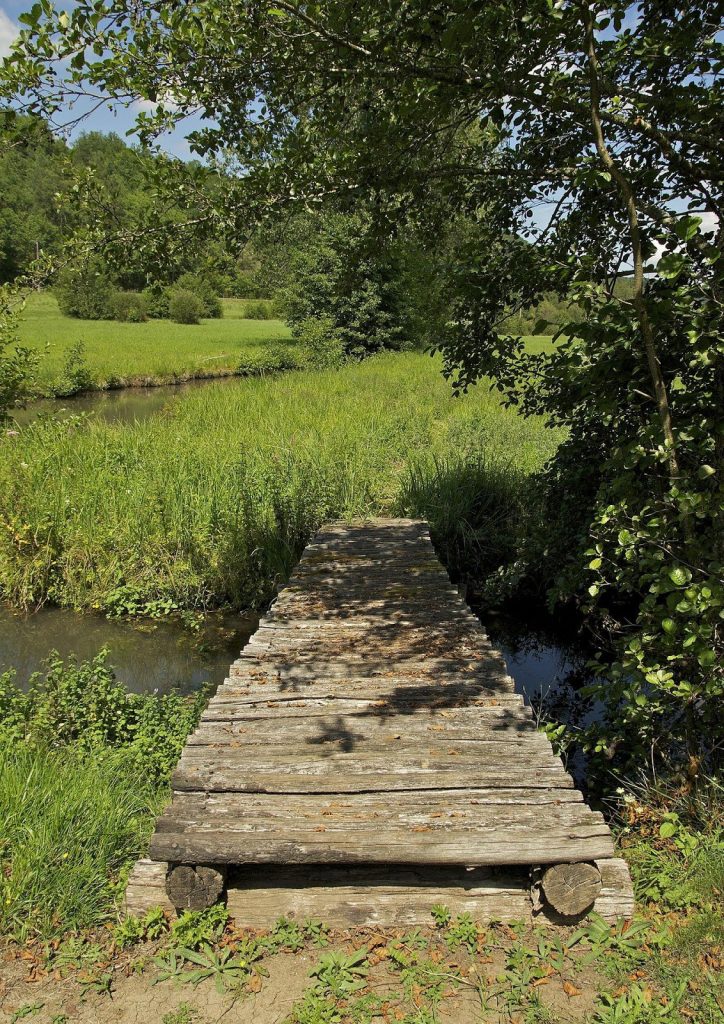 A recreation of an ancient beam bridge over a stream in France.

The earliest examples were built from stones or wooden beams and supported by stream beds, which acted as piers, or by stone slabs or wood beams.

Today, prestressed concrete is typically used to build beam bridges. This material is effective because the concrete withstands the forces of compression, while the embedded steel is able to resist the forces of tension. As referenced in the section above, concrete is one of the least expensive materials used to build bridges, which is one of the reasons beam bridges are so common. 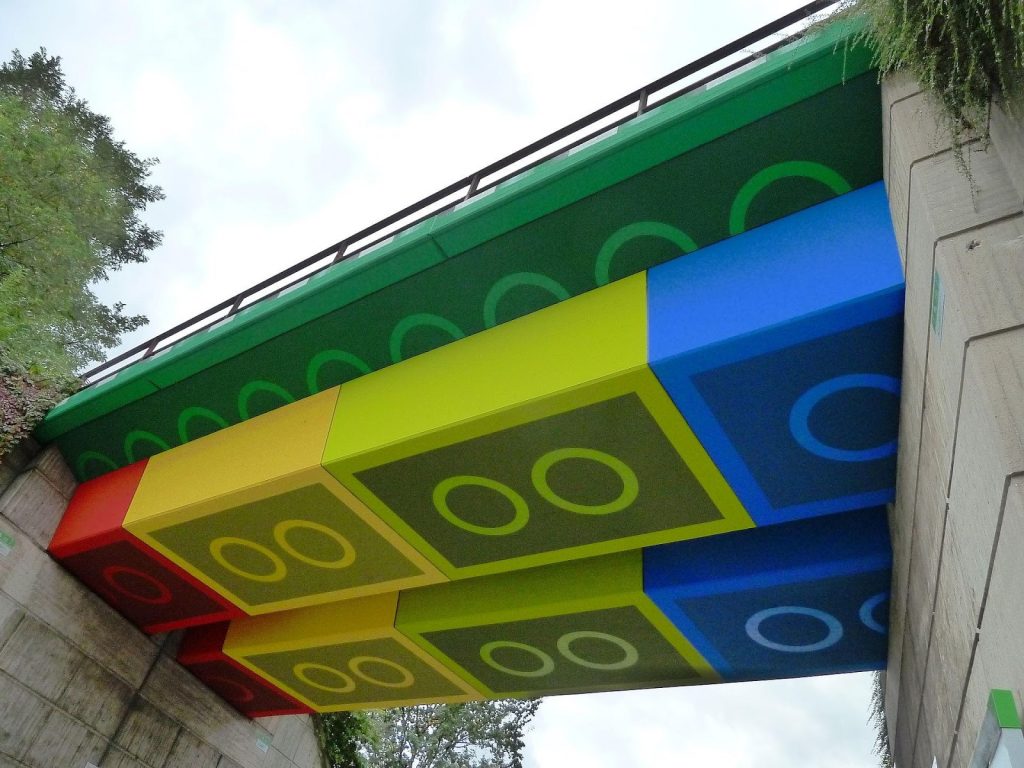 The Lego Bridge has been camouflaged to look like it’s built using the popular children’s toy.

The Lego Bridge is a simple concrete beam bridge in the city of Wuppertal, Germany. In 2011, an artist repainted the bridge in the style of Lego bricks, proving that even the most utilitarian structures can bring joy to the people who cross it or drive under it.

Despite the limitation, modern designers and engineers have found ways to use beam bridges to span longer distances. They simply connect several of them together. 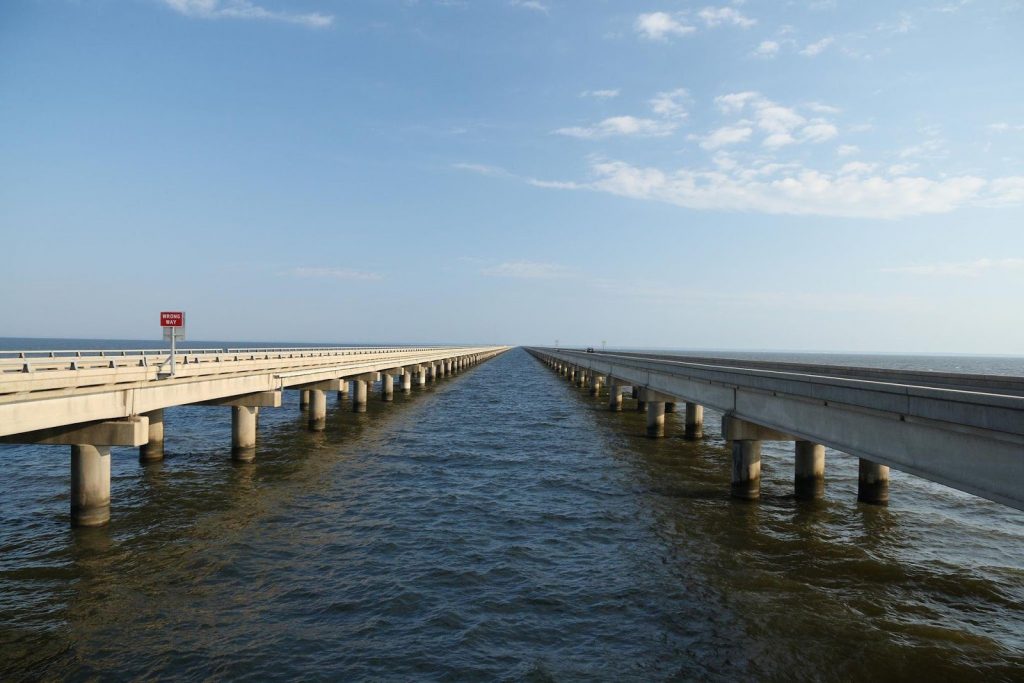 The two sections of the Lake Pontchartrain Causeway are made up of thousands of interconnected beam bridges.

An example of this is the world’s longest continuous-span beam bridge. The Lake Pontchartrain Causeway in Louisiana is almost 24 miles long. It’s a pair of two-lane sections that run parallel to each other. The south-bound lane, finished in 1956, is made up of 2,243 separate beam bridge spans. The north-bound section, completed in 1969, includes almost 1,500 longer beam bridge sections.

There are also seven crossover lanes that connect the two main sections, which serve as pull-over bays for emergencies. The Lake Pontchartrain Causeway bridge leverages the minimalist profile of beam bridges to limit its impact on the natural environment.

In part two of this series, we’ll look at iconic examples of suspension and cable-stayed bridges.