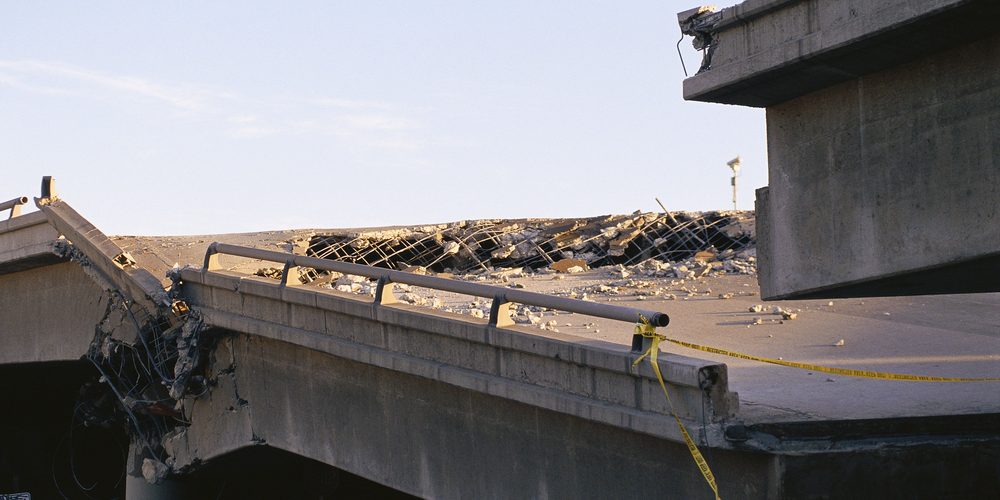 The recent earthquakes in California have more and more people thinking about the safety of bridges in areas that experience high levels of seismic activity. Unfortunately, the current situation isn’t good.

Many bridges in the United States, especially older ones built before modern seismic codes were developed, are unable to handle significant seismic loads. They could be seriously damaged not just by strong earthquakes, like the recent ones in California, but also by moderate ones.

In fact, the latest infrastructure report card from the American Society of Civil Engineers rated approximately one out of every eleven U.S. bridges as structurally deficient. This makes them particularly vulnerable to damage from earthquakes.

Over the last 60 years, earthquakes caused major structural damage to bridges across the U.S. This has resulted in millions of dollars in economic losses in many states including Alaska, California, Washington and Oregon

In order to prevent future damage and losses, bridges that are at risk must be identified, evaluated and retrofitted to make them less vulnerable to seismic activity.

Priorities have to be set because retrofitting all at-risk bridges isn’t practical or economically possible. Key stakeholders, especially local government agencies, businesses and residents, must work together to figure out how to maximize the limited dollars available to earthquake-proof bridges.

This is particularly challenging because these groups not only need to consider how to allocate resources, but also figure out how to handle the uncertainty of predicting possible seismic activity on many types of bridges in different locations.

How retrofitting dollars are allocated

These two methods provide quantitative results on expected damage and direct economic losses. However, they don’t consider the crucial effects of vulnerable bridges to broader traffic networks, public safety and extended, long-term economic activity. That means the current methods used by the FHWA are too limited and no longer adequate.

In an ideal world, bridges should be prioritized for retrofitting that are critical for maintaining post-disaster traffic flows at pre-earthquake levels. This change would put a greater focus on post-earthquake evacuation, rescue, recovery and ongoing economic health. It will place less focus on retrofitting costs and possibility of damage.

Every bridge site and situation is different. The evaluation process should identify the retrofitting strategies that make the most sense for each structure.

The key bridge components that must be considered when evaluating  retrofitting strategies are the superstructure, substructure and foundation. The potential level of damage sustained by bridges during and after earthquakes should also be taken into account.

Different retrofit tactics have differing levels of effectiveness. Seismic retrofits typically focus on achieving one or more of the following objectives:

Bridge damage classifications and possible retrofit strategies are identified in the Seismic Retrofitting Manual for Highway Bridges. Five retrofit levels are included in this model. A higher level strategy is more costly but will result in a more seismically resilient structure:

Did you know: The cutting-edge lifts from Bridge Masters make it easier to inspect and evaluate bridges?

The most common and serious seismic problems happen at the bearings and bearing seats. Issues in these areas can cause bridges to collapse. However, it’s relatively easy and inexpensive to prevent the failure of bearing and expansion joints. This can be done by adding restraining devices and bearing seat extensions, along with strengthening bearings or replacing them. When priorities are being set, this is a relatively small-effort, low-cost undertaking that could provide significant long-term benefits.

Retrofitting the substructures of bridges including the columns and cap beams tends to be more complex and expensive. However, in most cases, doing this is absolutely necessary in earthquake prone areas. That’s why there is significant research, development and testing underway to find more efficient and cost effective ways to improve bridge substructures. Many relatively recent evaluation and improvement methods have been successful. They are now part of regional seismic building codes, especially in earthquake-prone states like California.

It can be challenging to figure out retrofit and recovery costs because they are interdependent. A bridge network that has been retrofitted will be more resilient against earthquakes. Over time, these bridges will require lower recovery efforts and cost. And that’s not taking into account long-term economic impact to businesses located near damaged or destroyed bridges.

In the end, any bridge retrofitting evaluation strategy must find ways to spend the least amount of work and money possible to get the greatest possible safety and immediate- and long-term economic benefits.

The recent California earthquakes have been an important reminder of why this should be a priority in earthquake-prone areas.