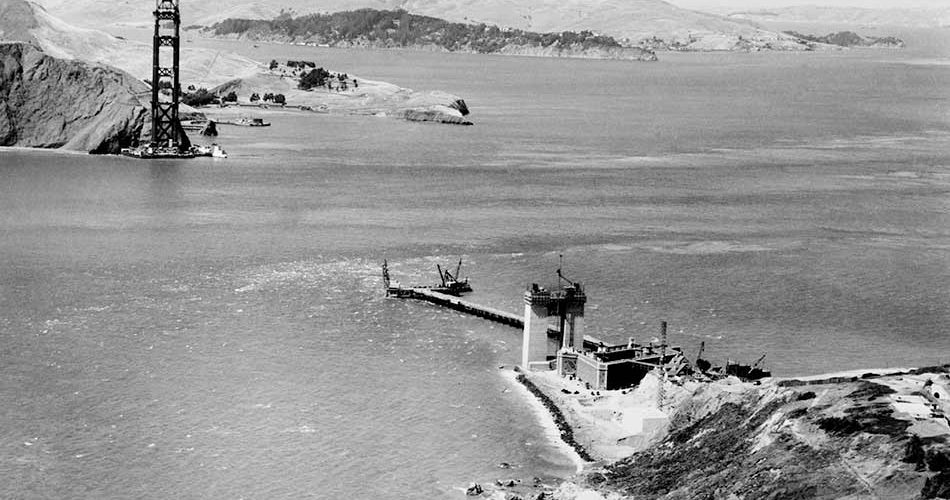 The following chart, based on data from the Federal Highway Administration, shows that the number of fatalities on road and bridge construction sites has remained relatively steady over the last decade. 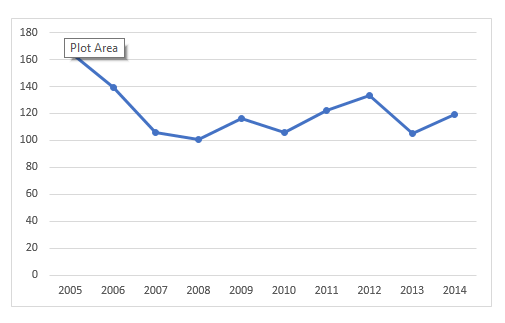 Did you know? Just one hundred years ago, dozens of workers could be killed on a single bridge development project, while hundreds could experience significant injuries.

The Federal Highway Administration also reports that the majority of injuries and deaths on roadway and bridge work zones happen to private sector (non-government) workers, including:

According to a report published by workzonesafety.org, the top causes of road work injuries and fatalities include:

Did you know? Using safer lifts and other cutting-edge equipment on bridge construction and utility installation sites can help reduce the number of deaths and injuries.

Some of the reasons injuries and deaths — while still too commonplace — have been kept in check include better safety regulations on job sites, improved equipment, and enhanced worker education.

To understand how safety has improved over the years, imagine yourself in the following scenarios of what it was like to work on bridge construction sites in the past compared with today. 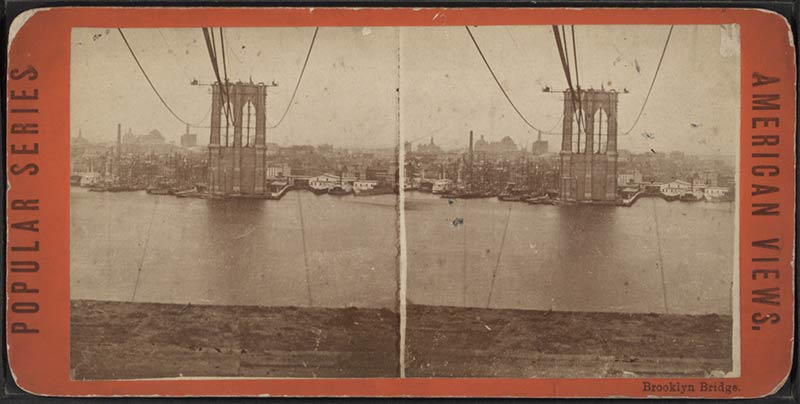 As a new immigrant to the United States, you’re happy to be earning two dollars a day working on the Brooklyn Bridge. Everyone is talking about this new wonder that will make it easier to cross the river from the fast-growing city of Brooklyn to Manhattan and back.

Your job as a “sand hog” is a tough one. You started working day one with no training and had to figure out how to do your job on your own or by watching your coworkers.

Every day, you’re up before dawn and find your way from your crowded tenement apartment down to the river. As soon as you arrive, you get into an iron chamber called an airlock with other hot and sweaty coworkers. It lowers you down to the bottom of the river where you enter a wooden structure called a caisson.

A few of the people you work with have suddenly died when they exited the airlock. Others find it hard to speak or stand up when they reach the river bed.

Once inside the caisson, you and the other laborers use shovels, picks, and dynamite to remove sand and soil from the base of the river. Your goal is to reach the bedrock below it. This is important work because it will allow the massive bridge to be built on a solid rock foundation. Week after week, the caisson is lowered as more dirt and debris is removed from the riverbed.

An experience you won’t forget: You experience severe headaches and joint pain while working in the caisson. But that’s nothing compared to other people who shake uncontrollably, are unable to speak, or can’t hear. (Years later, these symptoms will be attributed to “the bends,” a disease related to sudden changes in blood oxygen levels that occur when people travel or work underwater.) Several others have died because of accidents, especially from the use of explosives and dangerous tools on the worksite.

It’s no use complaining about the conditions. There are plenty of other new immigrants ready to take your place. You pass them in line every day on your way into the construction zone.

The bottom line: More than two dozen people died during the construction of the Brooklyn Bridge, and hundreds experienced debilitating illnesses. It took until 1909 for New York State to pass laws to protect people working in caissons. 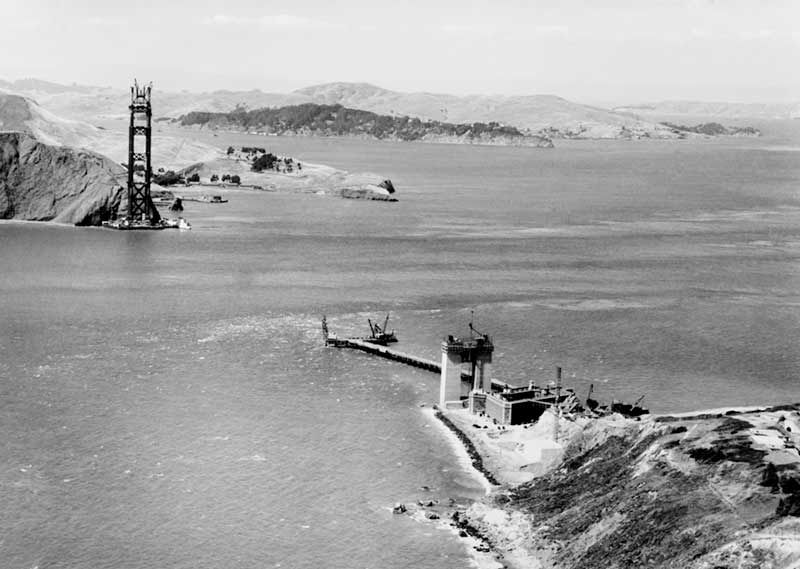 It’s the middle of the Great Depression, and you’re grateful to have a job during these challenging economic times. You may have balked at working more than 700 feet in the air in the past, but you’re happy to do it if it earns you a regular paycheck of around 10 dollars a day. And for the first time in history, workers like you are protected by innovations including cables that connect you to the bridge, protective netting positioned between you and the water below, a new invention called a hard hat, and basic ventilation equipment.

Despite these protections, conditions on the job are harsh. Divers working under water face extremely turbulent currents. Those who labor high up in the air experience extreme cold. When you go to work in the morning, you wear most of the clothes you own, and stuff them with newspaper for additional protection against the wind and damp chill.

Bathroom breaks are limited to 30 seconds, you eat on the run, and if your pace slows to anything less than a trot, you will probably be fired on the spot. After all, there are plenty of others willing to take your position if your performance flags or you become injured.

A day you won’t forget: A catwalk wasn’t properly attached to the bridge, became detached, and fell. Several people you worked with tumbled from the catwalk into the protective safety net. However, the net was torn as the catwalk fell, and twelve people ended up in the cold water hundreds of feet below. A few were saved, but the others perished amid the rough tides and hazardous floating debris.

The bottom line: The novel safety initiatives implemented on the Golden Gate Bridge project paid off. Only 11 construction workers died on the site, compared with 28 laborers who perished while building the neighboring San Francisco-Oakland Bay bridge just six months earlier. 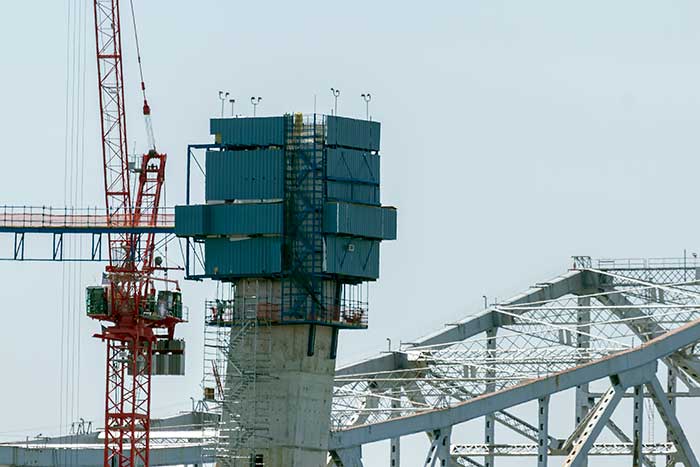 By Acroterion (Own work) [CC BY-SA 3.0], via Wikimedia Commons

You enjoy working on building the replacement for the Tappan Zee Bridge on the Hudson River in New York State.

The current bridge is an important connector between South Nyack in Rockland County and Tarrytown in Westchester County. The rapid growth of this area has made the current 60-plus-year-old structure obsolete. More than 135,000 vehicles cross the deteriorating bridge every day. This is far more than it was designed to carry. In addition, the Tappan Zee was built to last 50 years, so it should have been retired more than a decade ago.

The new replacement bridge is being built parallel to the old one so it can easily connect into existing roads when it’s finished.

On your first day on the job, you received training on how to stay safe. You’ve also been given information on who to contact, including officials at The Occupational Safety and Health Administration (OSHA), if you experience unsafe working conditions.

You’re grateful that you’re provided with the equipment you need to get your job done and stay safe. As a welder, this includes a state-of-the art hard hat, eye protection, ventilation gear, gloves, and more. Your equipment is connected to an electrical system that’s checked regularly to make sure it’s up to code.

When it comes to your fear of heights, you can rest assured knowing that you’re attached to the bridge infrastructure with a cable designed to hold many times your weight. There’s a strong net that will catch you should other systems fail. In addition, barriers and signage are present all over the job site to warn you about unsafe areas. Also, evacuation and rescue plans have been developed should something unexpected occur.

A day you won’t forget: Despite all the safety precautions, accidents still happen on bridge construction and utility installation sites. One day, a massive construction crane toppled over while hammering pilings into the riverbed. Amazingly, it didn’t strike any vehicles and only three workers experienced minor injuries.

The bottom line: In addition to the three workers injured in the crane incident, three people on a tugboat perished when it collided into a construction barge, and two more people died when their speedboat rammed into another barge while boating late at night. Despite these unfortunate accidents, no construction workers to date have been killed or seriously injured on what is considered to be one of the most ambitious bridge development sites in the world today.

Due diligence is key to maintaining safety on bridge and road construction sites.

In addition, it’s wise to use the latest equipment from an experienced provider on bridge construction sites and when installing utilities on bridges.