When is a bridge more than a bridge?

A bridge becomes more than a structure that connects two places when it plays a central role in its community.

In this article, we’ll take a look at four bridges that do more than link one place to another. These structures improve the lives of the people who reside, do business, and go to school nearby.

A bridge that’s a Main Street.

Kew Gardens is a close-knit neighborhood in the New York City borough of Queens. At its center is a rickety bridge lined with a variety of popular shops, restaurants, and an Art Deco movie theater. It connects Lefferts Boulevard over several railroad tracks. Most in the neighborhood think of it as their Main Street. 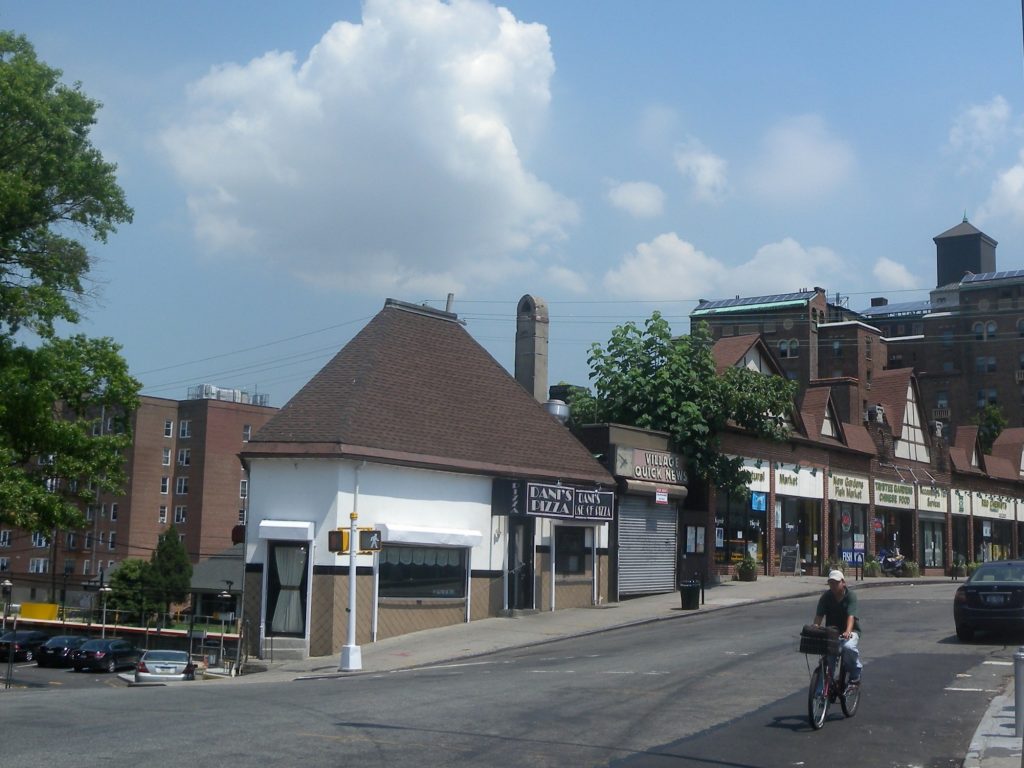 A view of the shops on the Kew Gardens Bridge.

The century-old bridge has been under threat for nearly three decades because the condition of the structure has deteriorated and become more dangerous over time. Things have gotten so bad that a hole opened up in the floor of one of the shops, which revealed the railroad tracks below.

Despite its poor condition, residents have fought against razing the bridge. They’re concerned that demolishing and replacing it would change the village-like character of Kew Gardens. Past attempts at urban renewal have scarred the neighborhood with structures that are too big and modern to fit into its unique collection of smaller historic buildings. People feel that removing and replacing the bridge could be a step too far, cutting out the heart and soul of the community.

Residents of Kew Gardens recently got some good news about the future of the bridge. A local council member was able to secure $1 million of government funding to conduct a study about whether to raze or repair it. Instead of using the money for that purpose, the Long Island Rail Road (LIRR), owner of the bridge, decided to put it toward shoring up the substructure, which could extend its life for another 30 years or more.

LIRR had fought against repairing the bridge for decades, claiming it was a waste of limited budget dollars. However, vocal community support changed their position, and the organization decided to take steps to ensure the bridge would be able to continue to serve the community.

However, this is only the first step toward securing the bridge. The support structure owned by LIRR isn’t the only section that needs rehabilitation work. The superstructure that the shops are built on, which is managed by an outside leaseholder, must be repaired as well.

The current lease expires in 2020. The holder has expressed interest in extending it and making the repairs. If that falls through, others would be allowed to bid on the lease, taking on the responsibility of completing the required rehabilitation work.

Owners of businesses located on the bridge hope the issue will be resolved soon so they can start planning for the future. For now, it looks likely that the businesses — and the bridge that supports them — will remain at the heart of Kew Gardens for decades to come.

A painting project connects a community.

The Campus District is a Cleveland neighborhood that’s split into north and south sections by highway I-90. The only thing connecting them and keeping them from becoming a “tale of two cities” is the East 22nd Bridge.

On the north side of the highway is the campus of Cleveland State University. To the south is public housing that was developed beginning in the 1930s. The highway cut across the Campus District in the 1950s. Since then, the differences between the two sections have become more pronounced.

Over time, the highway and bridge that connects them became symbols of racial and economic division in Cleveland. That is, until the city decided to turn the bridge into symbol of unity and connection through the innovative Bridge that Bridges program.

During a five-month period this spring and summer, people who work, live, or attend school near the bridge participated in a series of discussions about the neighborhood divide and what could be done to remedy it.

As a final step, those who took part in the talks were invited to paint a mural on the bridge that reflects the ideas generated by the community conversations. Over time, more and more people, including passers-by, joined in on the painting project. Many found that it was impossible to be angry or divisive while working together on the mural.

Unity, justice, and togetherness are the goals of the Bridge that Bridges program. For now, it looks like the East 22nd Bridge mural is a potent symbol and reminder of the importance of living those values every day. Many people hope this program will be extended to other communities in Cleveland and beyond, making more bridges symbols of unity rather than division.

A bridge project in a highly sensitive location.

The designers of the Verona Road overpass in Madison, Wisconsin, were challenged with developing a structure and related roadways that serve a wide range of needs for many different types of people. It carries vehicular traffic, pedestrians, and bicyclists in a busy urban zone, part of which is home to many disadvantaged people who are dependent on public transit. On top of that, the surrounding area is environmentally sensitive.

Because of the complexity, the design and development of the structure became an exercise in community building and compromise.

Many factors triggered the redevelopment project:

In order to solve these issues, the design team came up with a plan to transform the intersection under the bridge into a jug handle and roundabout, which reduces the potential for accidents while keeping the community connected in an environmentally friendly way. This overpass supporting Verona Road for almost 280 feet leveraged a unique design, featuring a pair of steel straddle bent bridges using a single pier column in the central island of the roundabout and pier columns on either side, well outside the bridge footprint. The outside piers straddle the roundabout.

Local residents had a big say on whether this innovative design would actually get built. In order to see how it would look and experience how it could impact their everyday lives, the designers developed a complete three-dimensional model, including a video showing how traffic would flow through the area.

The design was approved because it was easy for people to see how it would speed traffic, increase safety, limit environmental impact, and improve their everyday lives. This innovative structure has brought together a diverse community with complex social and transportation needs.

A bridge that brought together a disconnected community

A bridge doesn’t have to be large or located in a busy urban area to play a vital role in its community.

In the rural, mountainous Punjab District of Afghanistan, a simple bridge was completed in 2011 that has significantly changed the lives of the approximately 2,500 people who live in the area, along with their herds of sheep and other animals.

The 40-foot-long, eight-foot-wide steel and concrete bridge connects the two sides of Kajabi, a village split in half by a river. Prior to its completion, the only connector between both parts of town — and the larger cities beyond — was a rickety wooden bridge held up by two metal poles. It was extremely dangerous for people, vehicles, and livestock to cross it, especially in the winter and during the spring flood season. Cars and cattle often fell into the river, and pedestrians were injured while crossing it. The old bridge left residents on both sides of Punjab almost completely isolated.

The new bridge increased safety and makes it possible to cross the river all year long. It has helped lower the prices of goods sold in the area and those shipped from Punjab to be sold in other towns and cities. That’s because the new bridge can support larger trucks that charge lower freight fees. In addition, more direct shipping routes help speed products to market. Many who left Punjab seeking better economic prospects in bigger cities have returned.

One other benefit provided by the bridge: improved education. In the past, students on one side of the village were unable to attend classes in winter and spring. Now they are able to go to school throughout the year. On top of that, parents feel more confident sending younger children over the new bridge, which has increased the number of people getting a formal education.

In addition to building the bridge, more than 60 miles of area roads were improved by adding gravel topping.

Funding for the project was secured by the Afghanistan Rural Access Project (ARAP), a part of the Ministry of Rural Rehabilitation and Development (MRRD). The goal of ARAP is to provide rural communities across Afghanistan with all-weather roads and bridges, a novelty in vast sections of this impoverished nation. This will allow the communities access to basic services that can help improve the lives and futures of their residents.

The new Kajabi bridge may be small, but it has had a massive impact on the lives of the people in its community and beyond.