Bridges are generally thought of as static structures. The truth is that they actually act more like dynamic, living beings. They constantly change, responding to different loads, weather patterns, and other types of stress in order to function. In some cases, much like a person undergoing a trauma, bridges must “react” to extremely stressful events like accidents, explosions, fires, earthquakes, and hurricanes in order to survive.

In this article, we’ll look at how different types of bridges are engineered to handle stress. We’ll also examine some of the most common forces that put stress on bridges. These stressors can have a big impact on how bridges age, fall into decline, and potentially fail.

The most profound force affecting bridges is gravity, which is constantly pulling at them, trying to drag them down to earth. Gravity isn’t such a big deal when it comes to buildings, including large ones like skyscrapers, because the ground below them is always pushing back.

That’s not the case when it comes to bridges. Their decking spans open space. “Space” provides no support against gravity. Bigger bridges that span longer spaces are more vulnerable to gravity than shorter ones. Similarly, heavier structures are more likely to fall victim to gravity than lighter ones.

Bridge failures are a relatively rare occurrence. So, what is it that keeps them from tumbling down due to the force of gravity?

The answer is pretty much the same no matter the type of structure:

These forces are distributed in a variety of ways on different types of bridges: 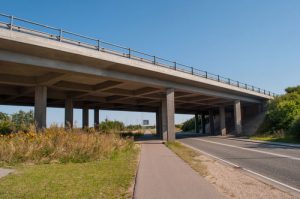 A beam bridge has its deck (beam) in tension and compression. (The beam can be squeezed and stretched depending on conditions.) The abutments are in compression, which means they are always being squeezed. 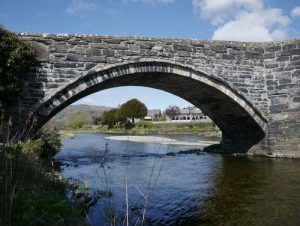 An arch bridge supports loads by distributing compression across and down the arch. The structure is always pushing in on itself. 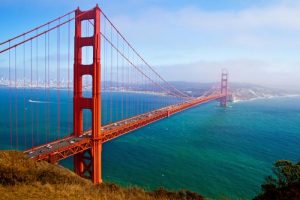 The towers (piers) of a suspension bridge are in compression and the deck hangs from cables that are in tension. The deck itself is in both tension and compression. 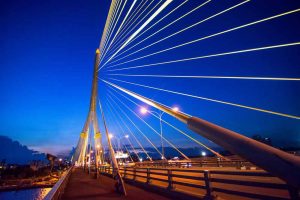 A cable-stayed bridge is similar to a suspension bridge. However, the deck hangs directly from the piers on cables. The piers are in compression and the cables are in tension. The deck experiences both forces. 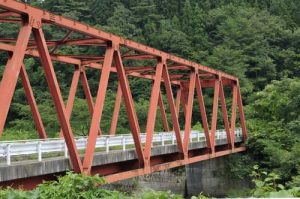 A truss bridge is a variation of a beam structure with enhanced reinforcements. The deck is in tension. The trusses handle both tension and comprehension, with the diagonal ones in tension and the vertical ones in compression.

An arch bridge supports loads by distributing compression across and down the arch. The structure is always pushing in on itself. 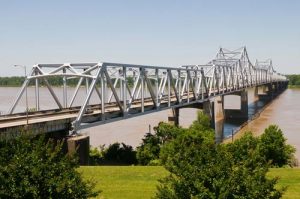 A cantilever bridge is one of the simpler forms to understand. Basically, it addresses the forces of tension (pulling) above the bridge deck and those of compression (pushing) below.

Check out these bridges that manage forces in unique ways:

This sculptural structure is a type of bridge commonly referred to as a curling bridge. It’s made up of eight triangular sections that are hinged together. The bridge is able to “uncurl” to allow pedestrians to cross it and “curl up” to let boats pass.

When the structure is in its “uncurled” state, it looks and functions much like a truss bridge. A system of hydraulic pistons is used to roll it into its closed, octagonal shape. 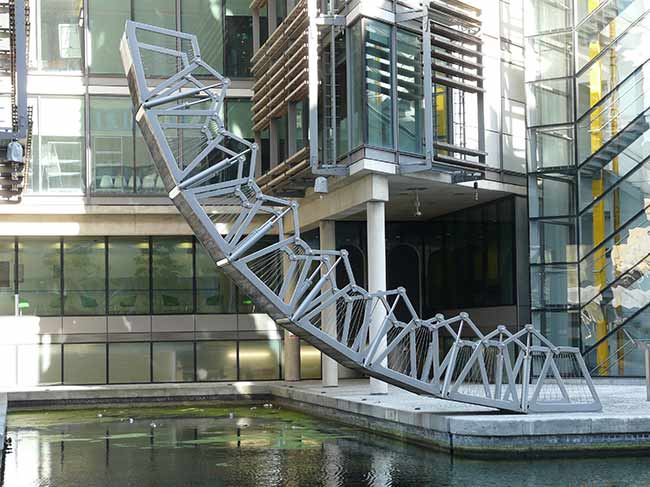 This innovative structure is often referred to as a “tilt” bridge. It uses an advanced hydraulic system to lift it out of the way when boats pass.

While this seems simple enough, this bridge must deal with unique tension and compression issues. It leverages features of suspension and cable-stayed designs that are pushed (and stretched) to extreme limits when the bridge is in motion. This structure adds a new dimension to standard bridge engineering. 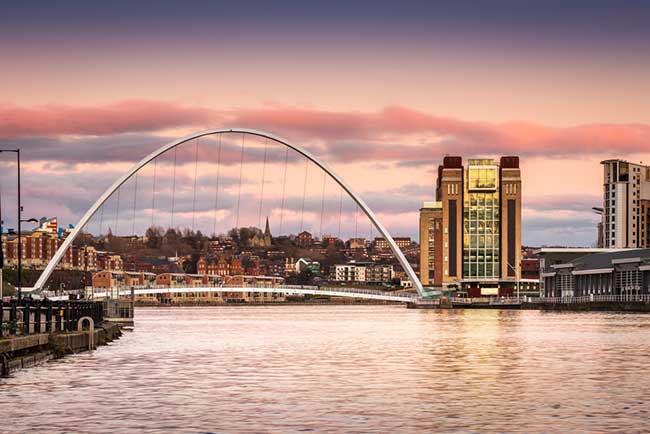 Bridge design is simple and complex at the same time. A bridge is constantly balancing compressive forces in certain locations with tensile ones in others so no overwhelming force, especially gravity, overcomes the structure at any time, leading to damage or collapse.

The complicating factor is that compression and tension on a bridge are constantly shifting because of stressors like:

It would be easy to build bridges if the loads on them stayed static. The forces on them would never change. The reality is that the loads can vary dramatically and dynamically throughout the day and over time.

Bridges carry everything from trains, cars, trucks, and pedestrians to water lines and other utility infrastructure. The amount of traffic and utility volume shift throughout the day, causing significant variations in the live load, which can increase and decrease tensile and compressive forces across the structure.

Example: When a railroad travels over a bridge, the structure bends and flexes, then returns to its original relaxed state once the train passes by.

Accidents and other unexpected events

Traffic and construction accidents, boats hitting abutments, and explosions can lead to significant bridge stress and sometimes, failure. Builders can leverage strong, fire-retardant materials and isolating elements to limit the impact extreme events have on the balance of forces affecting a bridge.

Some of the forces outlined above may cause immediate catastrophic damage to bridges or ultimate failure. These stressors also wear away at bridges over time, leading to long-term damage.

Much like living beings, bridges have ways of communicating that they’re over-stressed. Inspectors, managers, and engineers must look for these signs. It can help them keep existing structures safe and provide them with the information they need to design even more durable and responsive structures in the future.