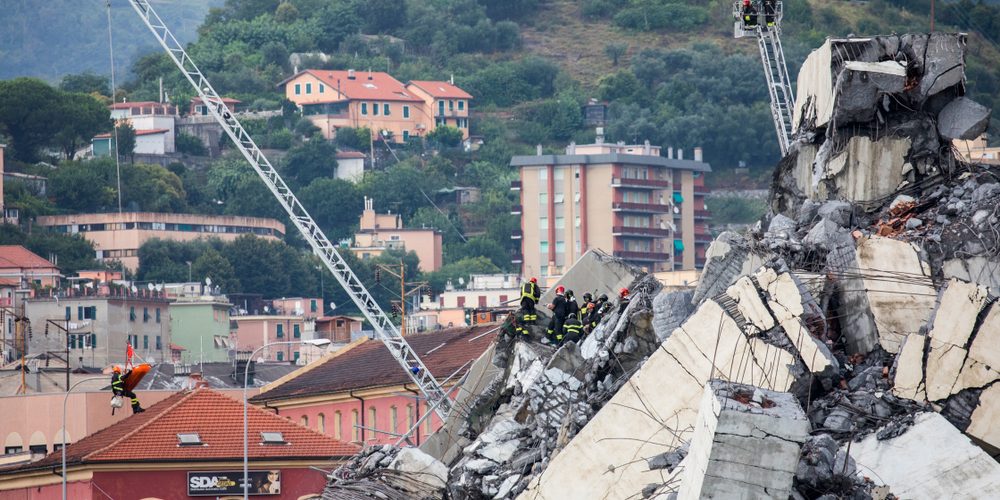 Italy is half a world away from the United States. What could cities here possibly learn from a bridge collapse that happened there?

Quite a bit, as it turns out.

The Italian calamity shows what may happen if things don’t change soon in the U.S. Will legislators and government officials learn from it?

Let’s start with the back story.

The collapse of the Morandi Bridge two years ago in Genoa, Italy, was an epic bridge failure. More than 40 lives were lost, and the inability to travel across it had a major negative impact on the economy of the city and the surrounding area — and on life in general. It accelerated a social and economic decline that had been taking place for decades. The recent outbreak of the coronavirus pandemic across Italy and the resulting economic crisis has only magnified these issues.

Despite this, bridge designers, engineers, contractors and builders have worked around the clock to build a replacement structure in an effort to return things to normal — or some new form of it — as quickly as possible.

The new viaduct, called the Genoa San Giorgio Bridge, was designed by Renzo Piano, which is fitting because he is a Genoa native. It took a remarkably short 15 months to build, and it’s become a point of pride for the city of Genoa and the country of Italy. This would be a great achievement in normal times, but now, it’s even more so because it was accomplished during one of the most challenging periods in recent history.

Despite this, many people who live in and around the bridge question whether it will be able to undo all the damage caused by the collapse and the decline that was already happening prior to the incident. They doubt that it will have a significant positive impact on the area over the long term.

Prior to the failure of the Morandi Bridge, the city of Genoa and the surrounding area were shrinking and contracting economically, demographically, and culturally. The disaster made things worse. Additional emergency road-related infrastructure repairs — most not related to replacing the Morandi bridge — caused even more issues. The pandemic only added to the challenges that the city was already dealing with.

Interesting fact: The Morandi Bridge wasn’t the only transportation disaster that happened in the Genoa area recently. The vault of a tunnel northwest of the city partially collapsed last year. Because of this, Italy’s Transportation Ministry ordered that all the region’s overpasses and bridges be thoroughly inspected. Almost all had serious safety issues that had to be repaired. This caused major traffic tie-ups across the area.

When the Morandi bridge came down on August 14, 2018, Genoa lost its fastest and most efficient east-west connection. It made living in the city challenging and slowed business activity dramatically. The government and Autostrade per l’Italia (Highways for Italy), the organization that manages the bridge, provided financial aid to companies in the area to help them stay afloat. However, many were forced to relocate or close down. Local businesses reported a loss of half or more of their sales activity because customers from the other side of the bridge could not easily reach them. That’s because many of Genoa’s stores and businesses are located on one side of the river and most of its residents live on the other.

Things got so bad that people in the city turned to bicycling to get around because it’s faster and more convenient than driving.

Local residents and business owners are happy that all the area bridge and road infrastructure work is finally reaching completion, but many question whether it’s too little, too late. Earlier maintenance could have prevented the loss of many lives, inconvenience, and damage to businesses. Going above and beyond this and actually rethinking the area’s antiquated transportation infrastructure and investing in new bridges and roads could have prevented much of the decline that the area experienced in the years prior to the bridge disaster.

So, what can cities in the United States learn from the experience in Genoa?

The answer: A great deal.

Cities across the United States have antiquated bridges and roads that are desperately in need of repair, much like Genoa. Some of these cities are also in decline because residents don’t find them attractive places to live anymore and it no longer makes sense for companies to do business there. The coronavirus pandemic has only made it harder for smaller businesses to survive. It has also shifted much of the money budgeted for infrastructure repairs and improvements to COVID-19 prevention, education support, and other urgent human needs.

All it would take in many of these cities is a crisis on the level of the Morandi collapse — or even less — for them to never be able to recover.

So, what can be done to prevent this?

A significant private and government investment in bridge and road related infrastructure is the only way for cities to avoid the slow and painful decline experienced by Genoa.

There is no reason to give up hope that this could happen. Even though several infrastructure spending proposals are currently stalled in Congress, the issue is a popular one with voters in both parties. It seems likely that money will be allocated to bridge and road infrastructure once the dust of the 2020 election has settled, if not sooner.

If legislators and government officials need to know why this is critical, all they have to do is to look halfway across the globe to Genoa.